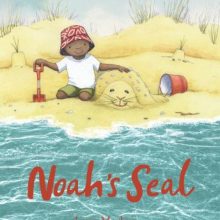 This summer the Library’s theme is “Oceans of Possibilities” and we are kicking it off with our Summer StoryWalk. Take a stroll in the Garden Plaza and along your way enjoy the book, Noah’s Seal, written and illustrated by Layn Marlow. Noah’s Seal is a story about Noah, a young boy, who wants to see the seals of the wide sea.

While Noah’s Nana fixes up their boat Noah begins to play in the sand. As Noah digs into the sand, he dreams of speckled seals, with whiskers and shining eyes, and his imagination begins to shape a seal out of the sand. Noah finds the perfect sea treasures to help bring his seal to life. He finds shells, two shiny pebbles for eyes, and seaweed for a mouth. After a sudden storm wipes away Noah’s seal, Noah and Nana decide to leave the sea; however they realize that they are not alone. Noah’s seal has come back to show them the way to the wild sea. Noah’s Seal is a delightful read for the summer.

Suggested Activities
Visit one of Westchester County’s public beaches and have fun with some of the following activities:

Below you will find additional stories and activities to share with your children to celebrate this summer’s theme – “Oceans of Possibilities”: 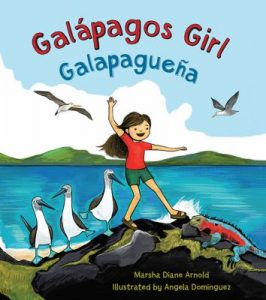 “Valentina is born a Galápagos girl, a galapagueña, and experiences the joy of growing up among the unique wildlife the Galápagos have to offer. Arnold has penned a poetic love letter to the spectacular wildlife of the Galápagos, inspired by Valentina Cruz, a biologist and conservationist. From blue-footed boobies to tortoises and even penguins, the islands seem to have it all. Readers will enjoy this quiet story of a young girl who finds not only a love of nature, but a way to come home to it again after study overseas, to protect it, and to share it with the world. Angela Dominguez's precise and clean but lively and colorful illustrations really bring everything to life and pull the book together. Young readers wanting more will find extensive backmatter with information about the real Valentina as well as all of the animals they meet within the pages. The text is in English and repeated in Adriana Domínguez's Spanish translation, which results in sometimes-crowded pages. Readers may find themselves wishing for two separate editions. More a celebration of the Galápagos wildlife and a call to action than a traditional story, the book will fascinate readers with Valentina's magical island life, and they will wish for nothing more than to swim with manta rays themselves. A timely lesson of conservation that will get kids looking at the wildlife around them and saying, ‘We will not forget you. And we will keep you safe.’” –Kirkus Reviews 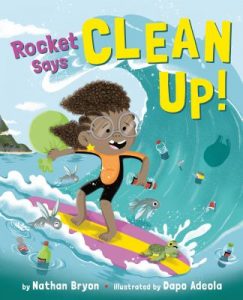 “Rocket is back with an environmentally friendly message. Series predecessor Rocket Says Look Up! (2019) encouraged readers to fix their imaginations on the stars. This sequel helps them to focus more terrestrially, on ocean pollution. With cool blues and warm and sandy tans, Adeola's cheery illustrations offer a brightly hued contrast to the previous book. Rocket is a brown-skinned girl with cornrows billowing into two perfectly coiffed afro puffs. She, her mother, and her brother, Jamal, are visiting the children's grandparents' animal sanctuary, nestled on an undisclosed tropical island. As they build sand castles and surf the waves with their grandchildren, Grammy and Grampy offer lessons about interacting with wild animals and the looming threat of pollution on island shores. The fun is instantly usurped when a baby turtle washes ashore tangled in plastic. As Rocket learns just how bad the pollution problem is, she immediately vows to take action. Quick-witted Rocket sets out the very next day to educate beachgoers, and in no time, Rocket has a cleanup crew compiling a mass of trash. With creativity and community partnership, Rocket and her newfound friends find an artful purpose for the accumulated waste. Rocket's whole family presents black, and the beachgoers are diverse. Included in the backmatter are resources to support and empower young readers. Rocket's fans will enjoy this can-do kid's return.” –Kirkus Reviews 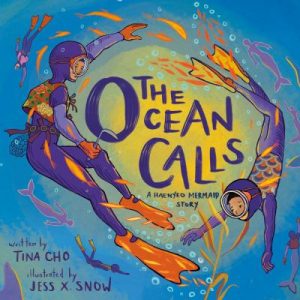 “As the granddaughter of a haenyeo diver, young Dayeon yearns to learn this honorable trade from her grandmother. On Jeju Island, at the southern end of the Korean peninsula, there lives a community of women called haenyeo who dive up to 30 meters underwater to gather shellfish. Without using any oxygen masks, the haenyeo divers harvest abalone, octopuses, and sea urchins by hand. The tradition is considered an Intangible Cultural Heritage by UNESCO, and the women who do this work are described as ‘indigenous marine biologists.’ Many of them are over 70 years old. Dayeon understands the dangers involved with diving. ‘What if I can't breathe? What if a shark comes? What if I can't escape?’ The familial determination that has been handed down along with diving skills helps her relax and reach the treasures at the bottom of the sea. The vibrant illustrations in cool, deep blue hues, punctuated by ochers and brick reds, capture the beauty of the natural world and lift the work up to near mythic proportions, befitting Dayeon's perception that they are mermaids. The captivating endnotes provide more information on the tradition, with mesmerizing quotes from actual divers. In Cho and Snow's celebration of this fascinating tradition, the risks and rewards are given only to the worthy–which takes practice, courage, and a grandmother's love. The sea, with equal parts danger and thrill, makes an exciting training ground for a young haenyeo diver.” –Kirkus Reviews 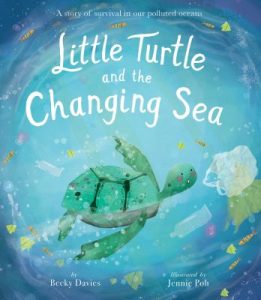 “This tale follows Little Turtle on an idyllic life course from hatching to maturity. One day, in the course of a pleasant journey back to the beach where she was born, she notices that colors are fading on the reef, and there are more and more “strange new creatures”—plastic bags, in Poh’s bubbly, shimmering undersea scenes—floating everywhere. ‘The ocean no longer [feels] like a friend,’ particularly after she is caught in a drift of netting. The light touch here offers a less-pressured—and arguably more developmentally appropriate—invitation to absorb the information about the causes and dangers of plastic pollution that Davies places in a closing note.” –Kirkus Reviews 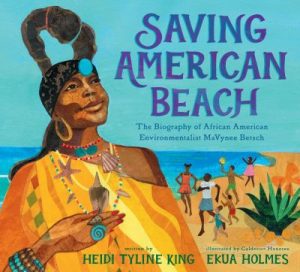 “An unsung American hero who used her voice to preserve the natural spaces she loved. MaVynee Betsch grew up in the Jim Crow South, where she and other Black kids couldn't swim with the White kids. An orange rope even segregated the ocean. Wanting beaches for all, MaVynee's wealthy great-grandfather, Abraham Lincoln Lewis, bought a beach in Florida and welcomed African Americans, calling it American Beach. This ‘ocean paradise’ entertained both regular folk and greats like Ray Charles, Zora Neale Hurston, and Ella Fitzgerald. MaVynee herself became a successful opera singer, but when her mother got sick and died, MaVynee abandoned her musical career and returned to Florida only to find her beloved beach in disrepair. Developers wanted to buy it to build condos. Holmes' stunning, intricately composed paint-and-collage images bring MaVynee to life in full color and capture her eccentricities: She grew her locked hair to 7 feet long, decorating it with seashells, sometimes styling it into a high topknot and other times draping the end over her arm. Holmes uses a brilliant cerulean for ocean and sky and peppers the vibrantly patterned illustrations with found items such as torn raffle tickets, newspaper clippings, promotional posters, and sheet music, making each spread visually rich, realistic, and fascinating. King's storytelling, Holmes' artwork, and informative backmatter portray MaVynee Betsch as the larger-than-life Black environmentalist she was… A spectacular story about a little-known eco-warrior whose story should be told and retold.” –Kirkus Reviews 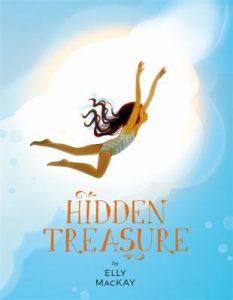 “A confident kid invites readers to join in a hunt for treasure. The protagonist, a kid with long, straight, dark hair and tan skin, heads to the bay with Papa and their dog. The beach there, the protagonist promises readers, is full of hidden bounty ripe for discovery. On the way, they pass a shop that sells souvenirs that some might consider treasure. The protagonist assures readers, though, that treasure is always best when we find it for ourselves. The child first searches the sand, uncovering some beach stones, and then in the water, discovering what might be a whale’s tooth. Diving into the cold water, the kid finds everything from a rusty key to a bubble wand. Some of the treasures espied, like cocoons, must be left behind, the mere observation a joy in and of itself. When it is time to go, the narrator must decide what treasure is worth taking with her—and what’s best left to the beach. The book’s soft, warm pastel palette and MacKay’s trademark diorama technique together create the feeling of a hazy, lazy day on the beach. The lyrical text is enjoyable at the line level, employing rich vocabulary and a flowing and natural rhyme scheme. The meditative narrative clearly communicates the importance of valuing and respecting nature without ever being pedantic or preachy. Beautifully captures the thrill of finding natural treasures.” –Kirkus Reviews 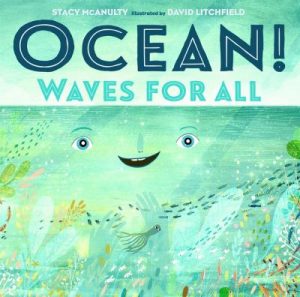 “Explore ocean basics in illustrated storybook format. Ocean narrates and is represented by two large, cheerful blue eyes, a crescent-moon mouth, and disembodied, impossibly elastic arms. Facts are shared conversationally, with vocabulary such as ‘dude,’ ‘stoked,’ and ‘chaa.’ The sentences gather and bend with illustrations, set in contrasting type that occasionally changes color to balance color schemes or emphasize key concepts. Information about the ocean's layers and marine features are presented with concise language and loads of visual interest. Double-page spreads teem with ocean life painted in warm, bright colors. A map serves as illustration when Ocean talks about land arriving–grown-ups may need to clarify that Earth's continents were not always in this current state. Ocean waits until readers are all drawn in and enjoying the wonders to reveal problems like trash islands and ice melt. Consumer-level actions for ocean advocacy are included in the aftermatter, but solutions and action are not discussed in the primary text. A handful of unnamed human characters have diverse skin tones and homogenous body types. Conceptualizing one ocean instead of four nods to global accountability while also allowing for character development. A pleasant dive into deep waters.” –Kirkus Reviews 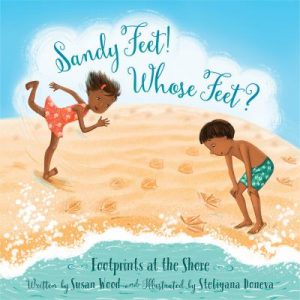 A family spends a day at the beach observing various creatures’ prints in the sand. Children and families of various skin tones and hair textures play on the beach as the main characters, a mother and father, a boy and a girl, all with brown skin, arrive, the children running toward the water. In spare, mostly rhyming verses, the text introduces “sandy feet” and “digging feet” and “wading feet” alongside small creatures as the children encounter them on the beach. A wet dog, a sandpiper, a scuttling crab, a sea gull. Each full-bleed illustration features motion—spraying water and creatures in action, with hints on each spread of the creature to be featured on the next. As the sun goes down, the family packs up and walks away from the water, tired out. The final spread shows a collection of prints featured throughout the book. Endnotes encourage readers to be “ecology detectives” and observe prints in nature, then provide information about the animals in the book. The calming beach colors create nostalgia for beach lovers, and the changing perspective of each spread adds interest for the duration of the book. More substantive than some beach-themed books, this one is engaging enough and notable due to the spotlight on brown children. –Kirkus Reviews