Archives for battle of white plains 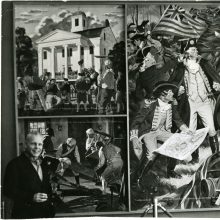 As the renovations continue and you rediscover the main floor of our library, we hope you look up–you'll see three unique murals. Hung high over the east wing (sit back in one of our new lounge chairs!) are murals by two artists who called White Plains home: Edmund F. Ward and Stanley P. Klimley. That's Klimley on the left standing in front of his mural when it was still in the lobby of the White Plains Hotel (image courtesy of the Westchester County Historical Society). Check out information on the artists and their works below!   White Plains resident and
Read More