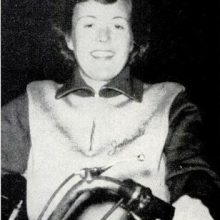 Colonel Johnnie Pantanelli knew two things when she graduated from Scarsdale High School in the early 1940s. First, she wanted to fly airplanes. Second, she liked driving motorcycles even though her mother and aunt tried to tell her riding was not a proper hobby for girls. As you will hear in this oral history, Johnnie (her given name is “Joan”) did not listen to anyone who tried to discourage her and charted a determined, adventurous course from an early age through her 90s. Johnnie joined the Civil Air Patrol during World War II. The CAP is the official auxiliary of
Read More