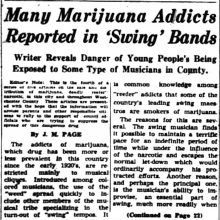 Most people are by now familiar with the “Reefer Madness” era of drug policy in the United States. Exemplified by the 1936 propaganda film of the same name and personified by Henry J. Anslinger (who set the tone for most domestic drug policy during his 32 years as head of the Federal Bureau of Narcotics), the “Reefer Madness” era is best known for its racism and over-the-top representations of drug users and addicts. The articles below show that “Reefer Madness” came to White Plains!   Reefer Madness According to the paper, over 100 people were questioned or arrested during raids
Read More

All Library Programs Canceled through 3/31 - Check here for updates.