A Lively Evening at the Library 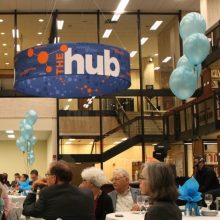 To celebrate the re-opening of the first floor, the Foundation held its annual fall Gala in the Hub on the evening of October 21st. Nearly 200 people attended the event, which marked the Foundation's 22nd anniversary. A highlight of the program was hearing from author Sloane Crosley who spoke about growing up in White Plains. All guests received a copy of Crosley's most recent book, the bestselling novel, The Clasp. Her work has appeared in Elle, Esquire, GQ, New York Magazine, Bon Appétit, The New York Times, Vanity Fair and more. Crosley's next book,  Look Alive Out There, will be published
Read More