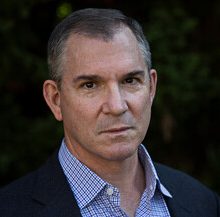 The White Plains Library Foundation is presenting a virtual author visit with bestselling author, journalist, and White Plains native Frank Bruni. He'll be talking about his new book, The Beauty of Dusk: On Vision Lost and Found.  Please join us on Tuesday, April 5th, 2022 from 7:00 – 8:00 p.m.  REGISTER HERE. 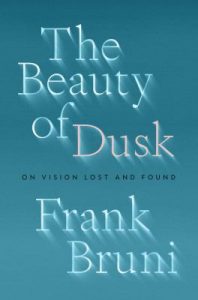 One morning in late 2017, New York Times columnist Frank Bruni woke up with strangely blurred vision. He wondered at first if some goo or gunk had worked its way into his right eye. But this was no fleeting annoyance, no fixable inconvenience. Overnight, a rare stroke had cut off blood to one of his optic nerves, rendering him functionally blind in that eye—forever. And he soon learned from doctors that the same disorder could ravage his left eye, too. He could lose his sight altogether.

In The Beauty of Dusk, Bruni hauntingly recounts his adjustment to this daunting reality, a medical and spiritual odyssey that involved not only reappraising his own priorities but also reaching out to, and gathering wisdom from, longtime friends and new acquaintances who had navigated their own traumas and afflictions.The result is a poignant, probing and ultimately uplifting examination of the limits that all of us inevitably encounter, the lenses through which we choose to evaluate them and the tools we have for perseverance.

Frank Bruni will be interviewed by Beth Kava, President of the Foundation.