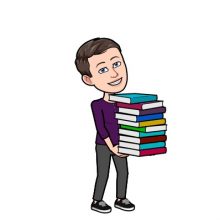 Kathlyn Carroll is a YA librarian, working with teens in the Edge. Originally from Atlanta, Georgia, she began her library career as an undergraduate working in a college library. She earned her MLIS degree in 2012 from Florida State University. She joined the Edge team in December 2013, one week after the Edge's grand opening. She feels lucky to have fun at work, and still can't quite believe that her job involves coaching book trivia teams, sewing, playing card games, and joking with teens.