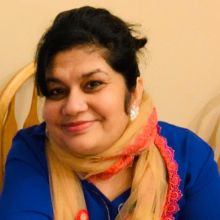 Madhu Sundriyal has worked at the Library since 1999. She began part-time and became full-time after about 2 years. Madhu has very much enjoyed her time at the Library through all these years. Being a resident of White Plains has strongly contributed to this. She says it “feels good to be able to help neighbors and people who have been visiting the library for years.” Seeing her own daughters grow up while visiting the library has also made it a huge part of her family’s life. Madhu says she has seen many bright children grow up before her eyes as they visited the library throughout their youth and believes it has played a positive role in the lives of both children and adults.