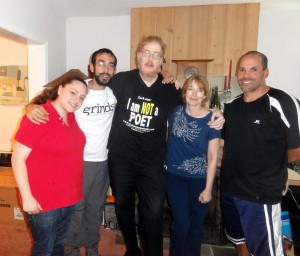 From a field of talented participants, poets Holden Contreras, Sr., Bryan Roessel, Eric ZORK Alan, Laura Vookles (LV) and Nina Robins were selected for the team by performing their original works in a series of competitive poetry slams at the White Plains Public Library culminating in finals on May 16. Two other poets, Peppermint (Holden Contreras, Jr.) and James Joseph Buhs, won spots on the team, but are unable to attend the championships.

Laura Vookles (LV) is originally from Memphis, TN, but has lived in Westchester County for over 25 years. She works as a curator at the Hudson River Museum in Yonkers. Her chapbooks are John on the Chrysler: Poems of Love and Grief (Poets Wear Prada) and Love Letters to My Mostly Ordinary Life. She has received Pushcart Prize nominations in poetry and prose. She has been featured at venues from Massachusetts to Mississippi and competed in two National Poetry Slams and two Women of the World Poetry Slams.

Bryan Roessel is a fifth-year science teacher at a small public high school in New York. He found out about slam in the spring of 2011 and thinks it's pretty neat. He sticks around largely because of all of the inspiring and kind-hearted people he's met. He's also been running his own slam in Suffern, New York, since December 2011.

Nina Robins grew up on the upper west side of Manhattan, and moved to White Plains when she graduated from high school.  She began slamming in February of 2011.  By day she works as a supermarket cashier and floral clerk. Her parents are writers/performers.  She has been surrounded by people who love words and being on stage her whole life. She is also a songwriter, writing songs with her sister when her poetry permits.

The Library’s Poetry Slam and Open Mic series is funded by the White Plains Library Foundation and occurs the first Wednesday of each month (except August).