The Jewish Experience in Comics 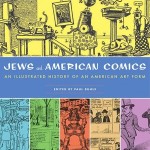 In the United States, a great many comics artists and writers have been Jewish. You might have heard of some of these men and not known their heritage because they changed their names to less ethnically identifiable names.

Stan Lee, co-creator of Spider-Man, the Hulk, the X-Men, the Fantastic Four, Iron Man, Thor, etc.? He was born Stanley Leiber. Jack Kirby, co-creator of Captain America (among other characters), was originally Jacob Kurtzberg, son of Austrian Jewish immigrants. He was determined to leave his poor, Lower East Side childhood behind. The other co-creator of Captain America, Joe Simon, was born Hymie Simon in Rochester, NY. The comics industry owes a lot to the Jewish artists, writers, producers who have created some of the top characters and comics. The industry’s most prestigious award – the Eisners – are named for Jewish-American artist Will Eisner.