Our Team at the Olympics of Slam — Nina gets a 10! 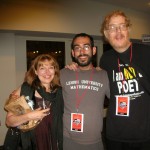 The White Plains Library Slam team competed in two preliminary bouts at the 2012 National Poetry Slam in Charlotte NC on August 7 and 8. Seventy-two teams from North America are taking part in this five-day event. Although our team did not advance to the next round in the Nationals, which are truly the Olympics of slam poetry, first-time team member Nina Robins made a hit with her performance of her poem “Arrested.” Her score was 27.6 (out of a possible 30 points). One judge even gave her a perfect score of 10!

Team member Bryan Roessel made it to the semifinals of the haiku slam, and took part in the nerd slam as well.

All in all, our team continues to generate positive buzz at the Nationals. As the emcee of their first bout noted, “I think it’s neat that a library has a slam team!”

Photo Caption: Three members of the White Plains Library Slam team – (left to right) LV (Laura Vookles), Bryan Roessel and Eric ZORK Alan– at the Booth Playhouse, one of the venues at the 2012 National Poetry Slam