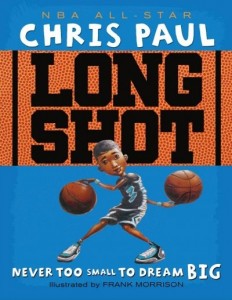 Well if you can’t get enough of Olympic basketball, bring the whole family for a cool walk along The Trove’s Summer StoryWalk® in The Library Gallery. As part of this activity, first through sixth graders take a chance at winning a basketball.

On your walk, you will enjoy an inspirational story based on the book, Long Shot: Never Too Small To Dream Big written by Chris Paul and illustrated by Frank Morrison. It’s the true story of how Olympic and National Basketball Association player Chris Paul ignored the teasing from others about how he was too small to play the game he loved. He dreamed big, listened to the encouragement of family and friends, worked hard, and made the team.

This is a great message to share with our youth today.

Kids who do the StoryWalk® and complete a form get a prize for participation, and are entered to maybe win a basketball.

Over the last couple of years, The Trove has hosted four different StoryWalks®.  We hope to expand the project to collaborate with other community organizations/businesses and welcome suggestions on proceeding with this effort.

The StoryWalk® Project was created by Anne Ferguson of Montpelier, VT and developed in collaboration with the VT Bicycle & Pedestrian Coalition and the Kellogg Hubbard Library. The idea is to combine literacy and physical fitness.