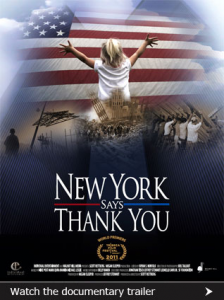 Filmed and edited over a six-year period, “New York Says Thank You” tells the story of survivors of 9/11 and survivors of natural disasters nationwide who have rebuilt hope in their lives by helping others in need. The film is a beautiful testament to the American Spirit as New York Says Thank You volunteers gather each year on the 9/11 Anniversary in small towns across America impacted by disaster to participate in good old fashioned “barn raisings.”

The secret to the Foundation's growing “Pay It Forward” movement is very simple: What we do is about 9/12.