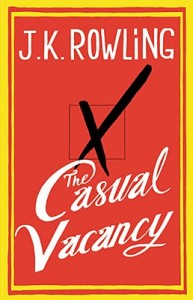 Thursday, September 27 is undoubtedly the most anticipated day in publishing this year, as J.K. Rowling’s new book, The Casual Vacancy, hits stores and libraries.

We’ve ordered twenty copies, which our distributor reports were shipped yesterday—so we should have them ready to circulate tomorrow. Ten copies are available to be reserved, while the other ten will be in our new book area, circulating on a “first come, first served” basis.

Is the book any good? We haven’t a clue, as the book has been heavily embargoed and there are no reviews. But reviews hardly matter; it’s already #3 on the Amazon U.S. sales ranking and we expect the many Harry Potter fans—along with the just plain curious—will be seeking a copy for months to come.

This is Rowling’s first book for adults (although certainly the Harry Potter series was avidly consumed by many adults). It is set in contemporary England, and provides a detailed look at the lives of people in the imaginary rural town of Pagford. In discussing the book, Rowling has mentioned her love of the Victorian realists, such as Dickens.

I’m expecting the book to be grittier than we might expect, with, of course, strong plotting and a good dollop of social issues.

For more on The Casual Vacancy, check out Ian Parker’s lengthy profile of Rowling in this week’s New Yorker or the much shorter interview in USA Today.