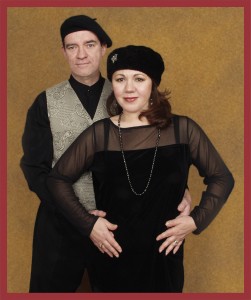 Johnny Mercer began writing songs at the age of 15 and eventually became one of the foremost figures of 20th century American popular music. From the mid-1930s through the mid-1950s, many of the songs Mercer wrote and performed were among the most popular hits of the time. He wrote the lyrics to more than a thousand songs, including compositions for movies and Broadway shows.

In their show on Sunday, October 28 at 2 p.m., Sonny & Perley will highlight favorites including “Skylark,” “Accentuate the Positive,” Blues in the Night,” and “Moon River.” The husband and wife team have spent the last several years developing and perfecting their unique blend of jazz, bossa nova, American songbook standards, and international cabaret which has become their musical signature. They engagingly perform the timeless standards of the American songbook such as Berlin, Gershwin and Porter as well as the irresistible bossa nova melodies of Antonio Carlos Jobim.