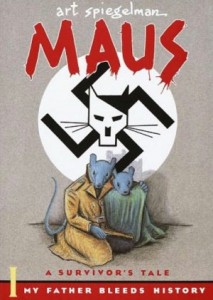 When it comes to non-fiction books created in a comics style, the term “graphic novel” becomes a misnomer, although it is certainly still used. I prefer to say “graphic non-fiction.” Are you surprised that non-fiction material has been covered by comics?

The one “graphic novel” to win the Pulitzer Prize was in fact non-fiction – Maus by Art Spiegelman. (In 1992 alone this book won Pulitzer, Eisner, and Harvey awards and Los Angeles Times' book prize for fiction. (!) This book tells the story of the artist's father's experience in the Holocaust as a Polish Jew and the artists' coming to terms with his father's story. It is an intense read, published in two parts: Maus: A Survivor's Tale: My Father Bleeds History and Maus II: A Survivor's Tale: And Here My Troubles Began.

Equally fascinating is Marjane Satrapi's Persepolis. Later made into an animated film, this book follows Ms. Satrapi's experience growing up in Iran after the cultural revolution, and later, her teenage years spent in Europe. Originally printed in four parts in France, the American editions were published as two books: Persepolis: The Story of a Childhood and Persepolis 2: The Story of a Return.

While memoirs and history seem to be frequent topics of graphic non-fiction, many other topics are covered. The Cartoon Introduction to Economics by Grady Klein and Einstein Simplified: Cartoons on Science by Sidney Harris are just two examples.