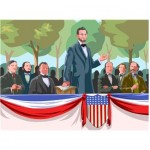 In honor of Abraham Lincoln, 16th President of the United States, the Library is closed on Tuesday, February 12. Some recent books the Library has acquired on President Lincoln include:

Emancipation Proclamation: Lincoln and the Dawn of Liberty by Tonya Bolden (Abrams Books for Young Readers, 2013) YA 973.71B

Abraham Lincoln and Frederick Douglass: The Story Behind an American Friendship by Russell Friedman (Clarion Books, 2012) YA 973.7 F

For fun, you can turn to fictionalized stories that utilize Lincoln as a semi-fictional character:

The Impeachment of Abraham Lincoln by Stephen L. Carter (Alfred A. Knopf, 2012) Fiction

And of course, there's a graphic novel: