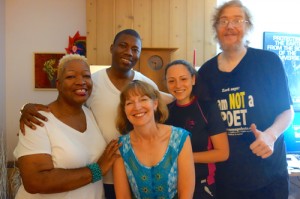 The Library's poetry slam team is competing in preliminary bouts at the 2013 National Poetry Slam in Boston this Tuesday and Thursday. Hostage, Eric ZORK Alan (slammaster), Nina Robins, and AJ won spots on the team by competing in our Poetry Slam Finals in May. Assistant slammaster LV (Laura Vookles) will also travel to Boston with the team.

The White Plains Library Slam will be one of 72 teams from all over the United States and Canada who will take part in the preliminaries at seven venues in the Boston-Cambridge area. Twenty teams will advance to the semifinals on Thursday, and the winner of the finals on Saturday, August 17, will become the 2013 National Poetry Slam championship team.

Our team has been at work since May, having group and individual coaching sessions with professional acting coach Bram Lewis. We wish them good luck!