Battle of White Plains Commemorations Have Their Own History and Purpose 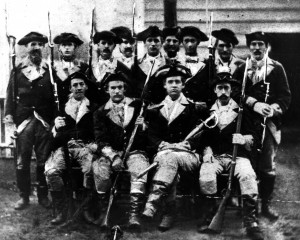 On Sunday, October 26, I attended the White Plains Historical Society's 238th Anniversary Commemoration of the Battle of White Plains at the Jacob Purdy House. Drawn by the promise of reenactors, mulled cider, and the chance to meet some White Plains citizens who are fascinated by history, I arrived before the ceremonies. This gave me the chance to walk around in the Purdy House (whose ceilings are higher than I expected) and talk with soldiers who had set up camp on the property.

Present were members of the 6th Connecticut Regiment, who refer to themselves as a Living History Organization; the 5th New York Regiment, “a dedicated group of living historians;” various members of the White Plains Historical Society, and the public. I witnessed many instances of the regiments living up to their titles as educators. They showed genuine interest and enthusiasm when greeted by a family or child.

Reenactments or commemorations are versions of a practice most cultures share- acknowledging the past through staged performances, dramatic dances, or ceremonial recitations. In White Plains, commemoration of the Battle of White Plains goes back at least as far as 1876. The Library's Rosch Collection contains photos of a well-attended 100th Anniversary Battle of White Plains commemoration in 1876, at which the Continental Company Guard of Honor to the Governor had its picture taken. The 13-man company was created to honor the 13 colonies who participated in the Revolutionary War and to act as a “reception committee and guard of honor to the Governor of the State and to the invited officials” (John Rosch, Historic White Plains, p.197-8). Commemorating the Battle of White Plains and relative success of the Americans against the British was taken seriously each time a nicely-numbered anniversary came along. The Governor of New York attended the 100th in 1876 and a marker was unveiled on the Bronx River Parkway at the 150th in 1926. In 1933, the city hosted a parade and the reenactment took on a more modern feel, held from the back of a truck.

The study of history is never put to a better purpose than when it is used to educate and enrich people in the present. The living historians and reenactors at the Battle of White Plains commemoration embodied this. It is my hope that the history programming and resources of the White Plains Public Library can achieve the same success. Look for upcoming programs and contact us at anytime with questions, queries, wonderings, or information about local history- you may be able to teach us as much as we can teach you! If you are looking for a place to donate historical materials or want to work together with materials you have, please contact the Local History Librarian.