Out of the Swamps: A History of 100 Martine Ave. 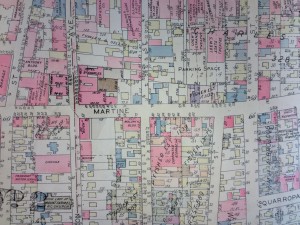 Join us on Sunday, May 17, at 2:00 p.m. for Out of the Swamps: A History of Downtown White Plains Told Through 100 Martine. The Friends of the White Plains Public Library have partnered with the Librarian for White Plains History and the City Archivist to present a program filled with stories, photographs, and maps that will enrich your perspective on White Plains. This program is presented in memory of Kay Conroy.

100 Martine hasn't always been the site of the public library, nor has it always been 100 Martine Avenue! Before White Plains was settled by Europeans, the Weckweeskeck people occupied the area around 100 Martine and called it Quarropas, a Munsee word meaning “white fog on the marsh.” During the Battle of White Plains, the area was utilized as a natural defensive barrier by Washington's troops. By the mid-19th century, the area where the library now stands was owned by Stephen A. Martine, who donated the land the street sits on to the city in 1868. During the next century, the area around 100 Martine filled up with houses, stores, light industry, and people. There are rich sources of information about this time in city directories, photographs, and the memories of people who lived in the neighborhood that included Brookfield and Winchester Streets. The 100 Martine we see today is largely the result of urban renewal projects begun in the 1960s.

Join us on May 17 to learn how 100 Martine transformed from a swamp to the site of White Plains Public Library- you are sure to learn more about White Plains along the way. Ben Himmelfarb, Librarian for White Plains History, and Elaine Massena, City Archivist, will be presenting.