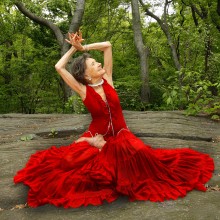 Millions across the globe have been inspired by 97-year-old Tao Porchon-Lynch–World War II French Resistance fighter, model, actress, film producer, wine connoisseur, ballroom dancer, and yoga master. Porchon-Lynch was named “Oldest Yoga Teacher” by Guinness World Records in 2012. She will appear at White Plains Public Library on Sunday, January 17 at 2:00 p.m. to discuss her book, Dancing Light: The Spiritual Side of Being Through the Eyes of a Modern Yoga Master.

Porchon-Lynch has been covered by media around the world and her YouTube videos have garnered over 2 million views. Her inspirational memoir, Dancing Light, shows us what is possible-–that we each can live to our highest potential and dance to our own rhythm. For more, go to www.TheTaoExperience.com.