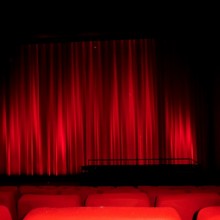 Our ever-popular International Film Festival returns starting Monday, July 11. Each film will be screened at 2 p.m. on Mondays through August 15. The festival has been going since 1987 (with a few breaks for construction and the like). Because we want our festival to be international in scope, we show motion pictures from a variety of countries and cultures, including those that reflect a film-making tradition that may be very different from our own. We attempt to offer a variety of genres, from comedy to film noir, and everything in between. We are limited by a number of factors, including availability, format, and running time (films must be two hours or less in length).

We are not able to preview all the films that we show. We must, therefore, rely on reviews from standard, respected sources, along with the recommendations of film distributors. We welcome your feedback and find it interesting to hear comments after the showings, with some viewers not enjoying the film and others loving it! Our auditorium tends to be chilly, so we recommend bringing a cozy sweater for your comfort. Films are selected for an adult audience and may not be appropriate for children.

This series is made possible through the generous support of the Friends of White Plains Public Library.

July 11 – Gloria
(Chile, comedy/drama)
A story set in Santiago about Gloria, a free-spirited older woman, and the realities of her whirlwind relationship with a former naval officer whom she meets out in the clubs.

July 18 – VIPs
(Brazil, biography/drama)
The life of a real con man and one of the biggest frauds in Brazil.

July 25 – Saving Private Perez
(Mexico, adventure/comedy/western)
Mexican crime lord is forced by his mother to plan a suicidal rescue mission to find his lost brother in the most unexpected place on Earth.

August 1 – Black Lightning
(Russia, action/scifi/thriller)
A Moscow college student’s gift car from his parents turns out to be more than anyone expects when it flies, which he uses to become both a city guardian and a speedy floral delivery boy.

August 8 – No eres tú, soy yo
(Mexico, comedy/romance)
Javier is crushed after his new bride leaves him. When his psychiatrist has no answers, he turns to the arms of his ex-girlfriends.

August 15 – Zokkomon
(India, action/adventure/drama)
An orphan is abused and abandoned, believed to be dead, and upon his return is first feared as a ghost, and then projected as a superhero.