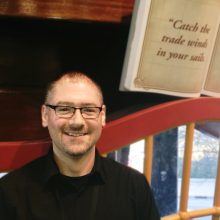 As the new manager of Youth Services, Josh Carlson wants a “Fandemic” to spread through White Plains.

“I was inspired by Comic Con becoming a phenomenon in large cities. At the Utica Library, there was ‘down time' for kids in August between the end of summer reading programs and the start of school in September. We held the first Fandemicon on a Saturday in August 2015, and 700 kids and their moms and dads came in costume.

Beyond Fandemicon, Carlson planned and implemented the Utica Library's “Super Summer Reading,” with traditional programs for pre-K through teens as well as the “Super Summer Challenge” for 10-18 year-olds. “It was an experiential program designed to get participants actively engaged both in the community and with the Library’s materials and programs, as well as thinking and creating all year long,” he says. “Super Summer Challenge featured over 120 programs, including in-house programming and guest performers/presenters.”

Carlson's creativity and enthusiasm led to his White Plains Public Library hire. “I saw the Youth Services manager posting on the Internet, and I applied for it because after eight years in Utica I was ready for a new challenge,” he says. “When I went to New York State library conferences and learned about the excellent reputation of White Plains–both the Library and the City–I was further motivated.”

He started November 21 in the new position, with responsibilities for teen activities added to those of what used to be children's librarian (last held by Rosemary Rasmussen, who retired earlier this year). “I'm in awe of the Library's remodeling, which has already given us The Trove for kids and The Edge for teens,” he says. “When the adult Library's remodeling is completed in 2017, this building will be amazing.

“White Plains has the advantage of being close to New York City, and my wife Vanessa and our 20-month-old daughter Violet will make the most of it. There is so much to do around here.” The Carlsons have relocated to North White Plains, and Vanessa continues her at-home job as an Internet marketer.

Carlson looks forward to putting his footprint on children's and teen activities at the Library. “Fandemicon went from inspiration to reality in a year in Utica, and my having just started in White Plains means that even more, you have to walk before you run,” he says. “My goal is to make a positive difference, and it will happen.”