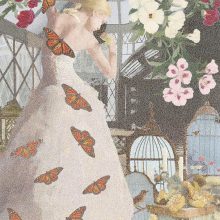 It was three decades ago when artist Donna Faranda first used a computer to ‘paint' in points, or pointillism, the movement created by 19th century French impressionist Georges Seurat. “I had painted ‘traditionally,' with brush, watercolors, easel and smock, but I felt confined by my small apartment in Brooklyn,” she says. “My husband, Jan Novick, is an IT professional, and he helped me see the potential of painting digitally at a time when home computers were primarily word processors.”

Technology and Faranda have both come a long way. “I now use Photoshop to create a montage from images that I have either drawn, scanned or found on the web. From these images, I create collages that I then turn into a grouping of contour line drawings that allow me to delineate the various areas of color. I then work on a tracing paper overlay in Corel Painter, a raster-image computer program where I can place each individual dot by clicking on my mouse” without a smudge or a smear.

Faranda's subjects are what she calls “a sensuous depiction of women from mythology”–both Greek and Japanese. “I seek not only to render the interaction of colors as I create images but also to explore elements of the female psyche, from power to vulnerability. I try to illustrate through my paintings their innate nobleness, revealing the instinctive nature that resides within them”  Influences include the 19th century pre-Raphaelite English painters Frederic Leighton and John Waterhouse with their emphasis on color and detail.

The Ossining resident's work has been exhibited in much of the U.S. and Europe. It comes to the White Plains Public Library as a digital slide-show that will be on display throughout January and February 2017 in the second-floor lobby. Included is the pictured A Wrinkle in Time, and a further preview of Faranda's portfolio can be found on http://bluedoorartcenter.org/portfolios/donna-faranda, the website of the Blue Door Gallery in Yonkers.

Faranda, who hold master's degrees in fine arts from Pratt Institute and in museum education from the Bank Street School, has traditional art in her portfolio, but she's hooked on digital. “The palette is incredible, with advancing technology that will soon make the color combinations infinite,” she says.

Faranda's blending 19th-century style with 21st century technique won her the Jurors Award from art entrepreneur Carroll Janis at the New York University Small Works Show as well as first prize in the 2016 A Sight for Sore Eyes national juried art competition from the National Association of Women Artists.

For more on how Faranda gets “to the point,” go to her website: http://www.micro-pointillism.com.