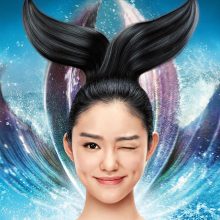 What Gone with the Wind, Star Wars and Titanic are to the U.S., The Mermaid is to China. The Stephen Chow-directed fantasy on a mermaid entangled in greed, love and revenge has grossed $553.8 million since its February 2016 release. That set a box-office record in China, which makes it all the more special that the White Plains Public Library will present a free screening of The Mermaid at 2 p.m. on Tuesday, August 15, in The Trove (second floor).

The Mermaid, in Mandarin with English subtitles, is the sixth of the seven-movie International Film Festival being shown at the Library this summer.

Liu Xuan (played by the popular Chinese actor Deng Chao) is an entrepreneur who buys the Green Gulf, an aquatic wildlife preserve that he wants to develop. To do so, he uses sonar technology to get rid of the wildlife without knowing that they include “merpeople”—half humans and half fish.  Many are killed, and the survivors vow to get even.

Enter Shan (played by Lin Yun), a teenage mermaid who was trained to walk and dance on her fins. That made her a “Mata Hari” with the assignment to seduce and kill Liu.

But love conquers all. Shan goes from seductress to protector after Ruolan (played by Zhang Yuqi), Liu’s girlfriend and business partner, gets jealous. That’s the foundation for a climax that is moving in Mandarin—or any language.

The International Film Festival will conclude on August 22 with Spain's Mondays in the Sun.