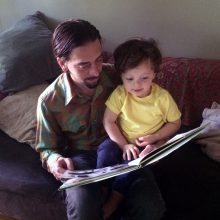 We are excited to welcome librarian Bobby Calero as the newest addition to the Trove. Bobby comes here from the Children's Library Discovery Center of the Queens Library in Jamaica, Queens. Despite the fact that he’s only five feet and six inches—and weighs about a 140 pounds—he was once the bouncer at an all-night jazz club in the West Village. But today he says that he “loves singing ‘The itsy-bitsy spider’ to two-year-olds at 10:30 a.m.!”

Bobby is a big fan of children’s book authors Yuyi Morales, Emily Hughes, and Neil Gaiman. He also loves Roald Dahl, particularly The Witches. “I am sure that for certain sensitive and creative children that book confirms that the adult world is run by these secret villains, with their motto concerning all children: ‘Squish them and squiggle them and make them disappear.’”

Bobby’s two year old son Ben also loves books and constantly makes his librarian Dad re-read Little Blue Truck by Alice Schertle and Jill McElmurry. According to Bobby “I think he likes listening to Dada make farm animal noises and beep like a car horn. Just last night, I read him the beautiful picture book A River by Marc Martin and he was so excited! With all the dramatic suspense and wonder he was experiencing, you would think he was watching a Spielberg film. I had to read it two more times before bedtime.”