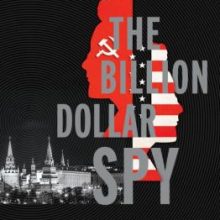 Looking for a good spy novel or nonfiction read? Look no further than the curated list below. Just click the title to put a copy on hold.

The Billion Dollar Spy: A True Story of Cold War Espionage and Betrayal by David E. Hoffman (2015)
Dead drops. Secret meetings. Suicide pens. Fact that reads as thrilling as fiction about Russian engineer Tolkachev who daringly passed critical military secrets to the CIA case officers in Moscow in the early days of the Cold War, eluding the KGB just blocks away. For a while at least…

Defectors by Joseph Kanon (2017)
Not only does Simon lose his State Department job when his beloved, charismatic, self-interested brother is exposed as spy in the CIA and defects to the Soviet Union, but years later he is drawn into Frank's treacherous schemes when he travels to Moscow to help him edit his memoir.

A Legacy of Spies by John Le Carré (2017)
Narrator Peter Guillam, retired spy and protégé of George Smiley, reflects on the moral ambiguities of the work they all did during the Cold War—especially his role in the deaths of a fellow agent and recruit. A nuanced weaving of past and present with the fascinating characters from Le Carre’s earlier books making appearances.

Red Sparrow by Jason Matthews (2013)
First in a trilogy — followed by Palace of Treason and the forthcoming Kremlin’s Candidate – by a veteran CIA spy. Steely and gorgeous Dominika Egorova, rising star in Putin’s ruthless intelligence service, is tasked with ensnaring dapper CIA agent Nate Nash and identifying the mole who is spying for the Americans. She and the CIA have other plans. Look for the movie version starring Jennifer Lawrence this spring.