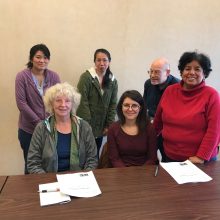 Want to lend a helping hand to a very bustling White Plains Public Library?  Come to the volunteer orientation on Tuesday, November 28 at 7 p.m. in Room A on the second floor. Library Assistant Director Kathy Degyansky will give an overview of the programs, and the attendees will list their skills, hobbies and passions on the application forms. Then, in the coming weeks, each attendee will individually meet with Degyansky for placement.

One project is the digitization of local newspapers. “It's converting microfilm–the way back copies of newspapers had long been preserved–to the Internet,” says librarian and historian Ben Himmelfarb. “Current newspapers like the Journal News do it on their own, but in the first half of the 20th century, White Plains had the Daily Press, the Daily Reporter and the Evening Dispatch that stopped publishing long ago. It's up to us to maintain the archive, and anyone interested in local, national and world history as it happened will find this fascinating.”

Another program is conversational English with those who speak it as a second language. “Many are professionals and spouses who are transferred here and want to be more comfortable in their new surroundings,” says librarian Austin Duffy. A recent class led by Curt Constable (a pharmacist who found a second calling) had participants from China, Colombia, Germany and Japan. “The experience has been as rewarding for me as it has been for them,” he says.

Volunteers are also needed in the Friends bookstore and with the food bank distribution.  And some volunteers have initiated programs on their own.  “Two that are very successful are sewing classes and help with writing résumés,” says Degyansky.  “We always support good ideas.”