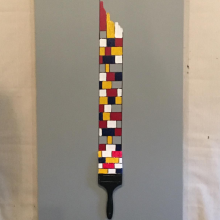 Rick Rogers is a self-taught artist who “grew up visiting galleries and museums and soaking in the riches of the masters.” His path was unusual as a park ranger for 10 years on the 4,300-acre Ward Pound Ridge Reservation (where he and his family lived for 34 years), but that would evolve into his co-founding Westchester’s Art in the Parks program and curating the reservation’s gallery.  Rogers subsequently spent 10 years at the Silvermine School of Art in New Canaan, Conn., doing maintenance and art installing.

While on the job, he “had the good fortune to meet many great artists who were very kind to let me pick their brains,” and that turned Rogers into an artist himself. “My interest is using ‘mixed media’ – enamels, latex polyurethane, etc., rather than acrylic or oil,” he says.  “Abstract artists and impressionism are my inspiration.  I am a fan of Andy Warhol, Willem de Kooning, Helen Frankenthaler and Jackson Pollack.”

And the late Dutch artist Piet Mondrian, who was famed for including his brush in the painting. Rogers emulates him with Mondrian’s Brush (pictured), which is part of his exhibit, “No Rhyme or Reason — Some art work by Rick Rogers,” that will be on display on the White Plains Public Library’s second floor from January 14 through March 24.

“It’s very exciting to me,” says Rogers. The Beacon resident has installed art in the Library, and getting the opportunity to showcase his own “is a thrill. There will be at least 20 pieces of art on display.”

Rogers also has an art therapy exhibit for patients at Northern Westchester Hospital in Mount Kisco that is on display through May.

It was a happy holiday season for Rogers and his wife Peggy as their youngest son Cade returned home after being deployed in Kuwait as a member of the Army reserve. And last fall their oldest son Austin won over $400,000 as a 12-time Jeopardy! winner and as a finalist in the 2017 Tournament of Champions. (Highlights are on YouTube.)