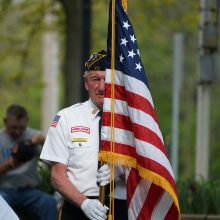 Writing Workshop for Families of Veterans

The adjustment for American veterans returning from war (depicted brilliantly by The Best Years of Our Lives after World War II and Coming Home and Born on the Fourth of July after the Vietnam War) extends to their families. “My late father, David Rust, was a member of the ‘Flying Tigers’ that flew dangerous missions over China and Myanmar [Burma] during World War II,” says Irvington-based telecommunications consultant Julia Rust. “I was born after he was discharged from the Air Force, but everything about him until his death in 2014 was influenced by the war—the way he moved, the way he drove, who he was.”

In 2014, Rust and David Surface, director of Veterans Writing Workshop (VWW), organized the first writing workshop for family members in partnership with Family Services of Westchester. “I was a participant in the first workshop we held, and I learned a lot by writing about my dad,” she says.

Families of Veterans Writing Workshop will be coming to the White Plains Public Library for a 10-week program starting on Tuesday, January 30, from 6:30-8:00 p.m. Funding comes from Poets & Writers and the New York State Council on the Arts.

“I have found the workshops to be very moving and therapeutic,” says Rust. “We help family members tell their stories using writing exercises that get to the root of memory and open up creativity. Most compelling to me are those who never knew their fathers.”

At the program’s conclusion on April 17, the participants’ writing will be published in an attractive print anthology, and they will have the opportunity to share their writing at a public reading.

VWW will be bringing veterans together with students to share their stories this spring in Ossining High School. In addition, VWW has begun to create an archive of veterans’ and family members’ stories on video, and Rust and Surface are looking forward to recording some of the stories created in the White Plains Library workshop.

For further information and to register for the workshop, contact Julia Rust: (914) 629-4016; juliarust@verizon.net.