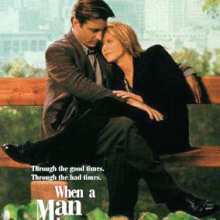 “When a Man Loves a Woman” Comes to the Library

On Thursday, January 18, from 2-4:30 p.m., the White Plains Public Library will present a free screening of the 1994 film When a Man Loves a Woman in the second-floor auditorium. The movie, which chronicles a wife’s alcoholism and rehabilitation and her husband’s inner conflicts, complements the Library’s Shaken and Stirred short-story discussion series on works centered around the multi-faceted use–and abuse–of alcohol in our culture.

Meg Ryan and Andy García play a couple with two young daughters. Their outwardly idyllic life is shattered not only from the binge drinking by Ryan’s character but also by her recovery, which brings added challenges to the family.  “García’s character is supportive, but this is far more than a ‘Stand By Your Man’ role reversal,” says White Plains reference librarian Barbara Wenglin, who leads the short-story series.  “When a Man Loves a Woman is engaging, contemporary and relatable.  The emphasis on the seemingly ‘perfect ‘ family and their hidden, secret torment is of interest, and the effects on the children are particularly powerful and devastating.”

The late Chicago Sun-Times film critic Roger Ebert–himself a recovering alcoholic–gave When a Man Loves a Woman a four-star “thumbs-up” in his May 6, 1994, review. He wrote that alcoholism is a disease of denial, and what the Luis Mandoki-directed film “understands is that those around the alcoholic often deny it, too, and grow accustomed to their relationship with a drunk. When the drunk gets sober, he or she becomes a fuller and more competent person, and that can threaten the old relationship. That’s why professionals call alcoholism a ‘family disease.’  It’s a hard concept to understand, but here is a movie that understands it.”

Ryan, best known for her comedic roles in When Harry Met Sally and Sleepless in Seattle, was a Screen Actors Guild Awards best actress nominee in a dramatic performance that Ebert “could not find a false note in.”

Wenglin’s short-story programs produce lively discussions, and she expects the same to happen with the film. “The impact on a family by both alcoholism and recovery calls for it,” she says.

Wenglin will select another film for screening in May after the spring discussion series using the same anthology, Shaken and Stirred: Intoxicating Classics (Everyman's Pocket Classics, c2016).  The program is made possible with the support of Friends of the White Plains Library.