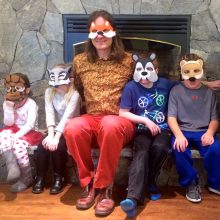 “I grew up on tall tales and day dreams,” says Jonathan Kruk, who went from “regaling his rambunctious brothers with bedtime tales” to becoming a master storyteller who has entertained elementary-school-aged children throughout North America for nearly three decades. He has become a Halloween and holiday-season perennial at the historic Old Dutch Church in Sleepy Hollow with his renditions of Washington Irving’s The Legend of Sleepy Hollow and Charles Dickens’ A Christmas Carol. All 60 shows have sold out every year since 2010.

On Wednesday, February 21, Kruk will bring his “Children’s Story Theater” to the Library for a 7:00 p.m. performance in our second-floor auditorium.  “These are classic fairy tales from around the world that I have adapted to get the kids’ participation,” he says. “I serve as director, guide, pied-piper, cajoler-in-chief and story-teller, and the kids perform.  Sometimes, I have had 10 kids on stage wearing masks or caps, and there also are tales that require help from the entire audience, including adults.”

Kruk’s one-hour performance will include the classic Puss n’ Boots and other fairy tales.  He has contrasting role models in the late Mister (Fred) Rogers, whose soothing story-telling entertained children on PBS for decades, and the late Robin Williams, whose comedy was physical and bombastic.  “Williams was lively and spontaneous in the manner of Danny Kaye, Gene Wilder and Viggo Mortensen. All of them influenced me.”

The Cold Spring resident has recorded eight CDs and has been cited as “Best Storyteller in the Hudson Valley.” Kruk first displayed his craft at Abington Park in Greenwich Village while getting a master’s degree in educational theater at New York University. “The White Plains Library was an early stop of mine,” he says.  “I look forward to returning.”