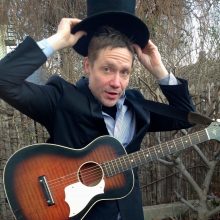 This event have been canceled for 3/21 due to weather and will be rescheduled. Please check back later for updates.

On Wednesday, March 21 at 7:00 p.m., Lloyd H. Miller will bring the Deedle Deedle Dees with their mix of interactive music and activities for children to our second-floor auditorium. Miller has performed for 15 years (often for kids in care facilities and hospitals), and he is the one fixture in the Deedle Deedle Dees, which he describes as “a traveling show with different components.”

In his performance, Miller’s accompaniments will include a bass guitar, ukulele and Olga Okuneva, a Brooklyn-based teacher and puppeteer. “Our program will celebrate women in science as part of Women’s History Month,” he says. “Olga will get the preschoolers involved, and I’ll engage the elementary-school students with sing-along stories about such greats as the journalist Nellie Bly, the aviator Amelia Earhart, the first woman in space Valentina Tereshkova and the first American woman in space Sally Ride. We put a special focus on stories that are untold or undertold in textbooks.”

The music will include songs from the Deedle Deedle Dees’ 2016 album The Rocket Went Up! It was the second in the “Sing Along History” series after the Civil War era-themed Glory, Glory Hallelujah! in which the back-up was “an old-timey rock-n-roll and jazz band.”

A highlight among the Brooklyn-based Miller’s many credits was his collaboration with jazz great Roy Nathanson on the 2014 musical Trashed Out.

The Library adds to the impressive venues where Miller and the Deedle Deedle Dees have performed. They include the Brooklyn Academy of Music (BAM), the Wolf Trap Performing Arts Center in Vienna, Va., the Clinton Presidential Library in Little Rock, Ark., and the SXSW tech and arts festival in Austin, Tex. This summer, a return engagement in Austin will include the library named for former first lady Laura Bush.