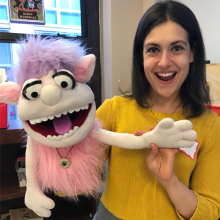 Actress and puppeteer Nicola Rose will bring her repertoire of interactive games, songs and stories to the Library for an 11:00 a.m. performance on Wednesday, July 11th.  “’Puppet Playtime’ is a series of short vignettes—games and stories—for toddlers and pre-schoolers,” she says. “I will be handing out scarves, toys and musical instruments so that the kids can play along with me. They will be very much involved.”

The Bronx-based Rose is a Columbia University graduate and received a master’s degree in theater from the Sorbonne in Paris, where she studied for two years.  She is an accomplished independent film producer and director (most of her work is for grown-ups), with Creative Block, about a young artist and puppet-maker, having won awards at the Mindfield Film Fest in Los Angeles and at the Spotlight Short Film Awards in Atlanta. Puppets were also central to her  Web TV series Callie & Izzy.

Puppetry for kids is a passion that Rose got from watching the late Shari Lewis.  ”Shari is a role-model because she connected with children so brilliantly. Lamb-Chop’s Play-Along on PBS was a favorite program of mine when I was growing up, and Shari made her characters seem so real.  That’s my goal, too.”

“Puppet Playtime” is sponsored by the White Plains Library Foundation.