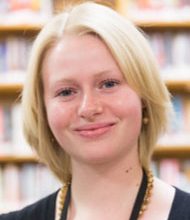 This month, we’d like you to join us in welcoming Ashley Bressingham to the Library and the White Plains community. Bressingham has joined our ranks as a Children’s Librarian in the Trove. You’ve probably already seen her at the Trove’s Compass Desk, but she’ll also be leading children’s programming events. I interviewed her this week to learn a little bit more about her and her love of libraries.

Bressingham, who grew up in Garden City, Long Island, calls herself a “life-long library patron” as she began frequenting her local library at a young age. Further proof of an early interest in libraries, Bressingham’s first job while still in high school was working as a page in her hometown library. After graduating high school, she went to Pace University, where she majored in English and Communications. Bressingham then went on to work in publishing before going to graduate school at Queens College and deciding to pursue a career in libraries.

In her spare time, Bressingham says she enjoys visiting museums and watching superhero shows and is “a big Marvel and DC fan,” with her favorite being the Netflix original series Jessica Jones. Bressingham is also an avid reader of YA literature, and she recommends the Shatter Me series by Tahereh Mafi, as she “just finished the fourth book in the series and loved it!” Bressingham also enjoys listening to audiobooks, and recommends the audiobook format of Pam Muñoz Ryan’s Echo to any younger readers “who want a good mix of historical fiction and fantasy.” While it’s a longer read, she says that it’s “definitely worth the time it takes to make it through to the end.”

In her new position, Bressingham is most interested in early literacy and “fostering lifelong learning” through storytimes and programs like Trove Time, which will return this fall.