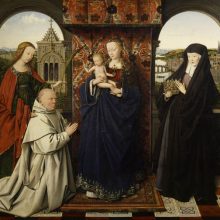 At the Frick: The Charterhouse of Bruges: Jan van Eyck, Petrus Christus, and Jan Vos (through January 13, 2019). “For the first time in twenty-four years and only the second time in their history, two masterpieces of early Netherlandish painting…are reunited. These works…are shown with a selection of objects that place them in the rich monastic context for which they were created.”

The Guggenheim is exhibiting the stunning paintings of Hilma af Klint, (through April 23, 2019). “When Hilma af Klint began creating radically abstract paintings in 1906, they were like little that had been seen before: bold, colorful, and untethered from any recognizable references to the physical world…af Klint kept her groundbreaking paintings largely private. She rarely exhibited them and…her work was all but unseen until 1986…[this is] the first major solo exhibition in the United States devoted to the artist.

Don’t miss Charles White: A Retrospective at MOMA (through January 13, 2019). ‘’Art must be an integral part of the struggle,’ Charles White insisted. ‘It can’t simply mirror what’s taking place. … It must ally itself with the forces of liberation.’ Over the course of his four-decade career, White’s commitment to creating powerful images of African Americans—what his gallerist and, later, White himself described as “images of dignity”—was unwavering.

Journey to where magic and myth began at the New-York Historical Society’s Harry Potter: A History of Magic (through January 27, 2019). “Capturing the traditions of folklore and magic at the heart of the Harry Potter stories…this British Library exhibition, combines century—old treasures including rare books, manuscripts, and magical objects…From medieval descriptions of dragons and griffins to the origins of the sorcerer’s stone, visitors will explore the subjects studied at Hogwarts and see original drafts and drawings by J.K. Rowling.”

The Intrepid Sea, Air & Space Museum Complex already offers plenty to explore, but a new exhibit—A View from the Deep: the Submarine Growler & the Cold War—offers a fascinating look into Growler, one of the first nuclear-missile submarines, which hails from the Cold War era. “Explore the history and design of USS Growler…Historical artifacts, oral histories and immersive experiences offer a behind-the-scenes look at life on board. Then experience the actual submarine Growler!”