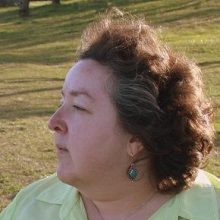 This post has expired. Visit our adult calendar to see upcoming book and author events.

When Ann Chiappetta lost her vision in 1993 because of retinitis pigmentosa (RP), a “Why me?” cry would have been very understandable. The New Rochelle resident had a family and a successful career as a designer of acrylic displays and furniture, where sight, of course, was critical. RP is a rare, genetic ocular disease that strikes about 1 in 4,000 people (the gene is recessive), and Chiappetta was the first in five generations of her family to be afflicted. “The diagnosis had come years earlier because of the symptoms, which include night blindness, but losing all of my vision was still a shock to me” she says. “Thankfully, my two children tested negative, but they are carriers.”

It would take Chiappetta 10 years to, in her words, “fully adjust.” She would earn a bachelor’s degree from the College of New Rochelle (which in September was absorbed into Mercy College) and a master’s degree in marriage and family therapy from Iona College. “I work as a readjustment counselor for combat veterans and their families,” she says, which is endemic because her husband Gerry was deployed by the U.S. Navy to the Middle East when tensions were high in the 1980s. “And I started to write.”

In doing so, Chiappetta has become an advocate for the disabled, and she became adept in training guide dogs and pet-assisted therapy as well as advising vision-impaired people and their families. Thus far, she has written three books—Upwelling Poems, Follow Your Dog (on how her guide dog made her “independent”), and the recently released Words of Life: Poems and Essays, in which she shows her ability to write about the “light and dark sides of life.”

Chiappetta will share her experiences on Tuesday, October 8, at 7:00 p.m. in the Library’s Galaxy Hall on the second floor. “I will read passages from my books, and I look forward to the discussion and participation.”

Chiappetta has a significant presence locally (in 2015 she received the Westchester Disabled on the Move’s “Spirit of Independence” award), and her horizons expand on September 26 when she will be interviewed on Minneapolis radio station KFAI’s “Disability and Progress.” It will be streamed live on kfai.org at 7:00 p.m. (Eastern) and can be accessed at the site afterwards.