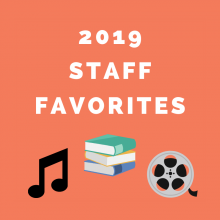 The White Plains Library Staff have assembled their picks for the year, featuring cookbooks, DVDs, music, audiobooks, and plenty of plain old books. It's a wonderfully wide-ranging list, full of lots of surprises, and should help with your holiday shopping or just some entertainment for yourself. Enjoy!

Below you'll find a list with links to the catalog or resource where they're available (simply click on the title) as well as a blurb on why staff enjoyed it.

(Cookbook)
“Why I liked it: Because of the mix of classic recipes like carrot cake and unusual ones like pumpkin bread with olives, Parmesan, and rosemary. The recipes are simply written, and the author adds notes/tips at the bottom of recipes, in addition to interesting introduction to baking topics for novice bakers like ‘how to weigh flour.'”—Terri, Periodicals & The Trove

Red Joan (Film DVD)
“A terrific true story starring Dame Judy Dench about an 80-year-old British woman who gets arrested for treason after sharing classified atomic bomb information with the Soviet government for decades. A great cast and an interesting piece of history.”—Tim, Adult Services

“Starring Keira Knightley, this film tells the true story of a British intelligence specialist who leaks a confidential memo to the press that shows the invasion of Iraq in 2003 was not legal. Also starring Ralph Fiennes and Gavin Hood, this is a thriller of a tale.”—Tim, Adult Services

“This thriller is a wild ride with some unpredictable turns and I enjoyed every single minute of the nuanced narration. There’s a smart home run by an app, a poison garden, and a Scottish family that can’t keep nannies from quitting. For fans of Gone Girl.”—Nancy, Director of White Plains Library Foundation

Cursed by Frank Miller and Tom Wheeler (Young Adult fiction)
“Cursed is the story behind Nimue, the Lady in the Lake. As a young girl Nimue was shunned by her village of Fey kind, but when the Red Palladins burned their village she was charged with taking care of the Sword of Power and rose to be the savior of the Fey Kind.”—Erik, The Edge

“A fine ending to a provocative and smart series with fierce, intelligent, and determined young female protagonists trying to save the world with time travel and paper routes.”—Julia, The Edge

The Handmaid's Tale: A Graphic Novel by Margaret Atwood and Renee Nault
“I read it because I'd read the original so long ago and wanted to refresh my memory before reading Atwood's The Testaments. I loved how true to the novel the necessarily truncated story is and how the illustration fully support both the story and the general mood.”—Julia, The Edge

“An engrossing historical saga about a lonely young woman grieving the loss of her brother and fiance after World War I. The author takes her time giving rich details to the historical context and to the very nuanced story itself, and as a fiber artist I greatly appreciate the attention given to the work of the women in the Broderers.”—Julia, The Edge

The Beekeeper of Aleppo By Christy Lefteri (Adult fiction)
“I was deeply moved by this novel that makes vivid the catastrophe that is Syria and the plight of asylum seekers. It is simply and beautifully narrated by Nuri, a humble beekeeper who flees the country with his wife and settles in England to recover what sustains him: beekeeping.”—Christiane, Collection Management

“Three college friends, now in their sixties, have a weekend reunion on Nantucket. One can always count on Russo for well-developed characters and a plot with enough tension to carry you along. Sort of a Big Chill for Baby Boomers.”—Christiane, Collection Management

This is How You Lose the Time War by Amal El-Mohtar and Max Gladstone (Adult science fiction)
“Amazon’s synopsis for This is How You Lose the Time War does not do this book justice. This epistolary novel allows each author to give personality and voice to one of two skilled agents on opposing sides of a war for the fate of the futures from which they come. The novel tells of their rivalry, romance, and ultimately love that transcends time and stands in defiance of all they have ever known. This book pulled me in with its premise, hooked me with the beauty of its writing, and provided a wonderfully satisfying conclusion.”—Josh, Youth Services

“Based on Deborah Harkness' bestselling trilogy of novels, A Discovery of Witches is a well-acted and beautifully filmed adaptation, with gorgeous cinematography filmed on location in Cardiff and Oxford, and wonderfully designed sets. Filled with drama, romance, intrigue and action (and much time spent in libraries), as well as vampires, witches and demons, it is riveting escapism.”—Josh, Youth Services

The Library of Lost and Found by Phaedra Patrick (Adult fiction)
“This is truly an enjoyable book that examines who we are as people, our sacrifices for family while coming to terms with losses by understanding that as humans our history builds us while sometimes positively defining us in the best and worst of situations.”—Mary Ellen, Circulation

The Tattooist of Auschwitz by Heather Morris (Adult fiction)

“Amazing true story that allows the reader to think of the extent that we would go to survive any circumstance to not just live, but to live and make a difference. It's a story of a man who struggles ethically, strategically survives, falls in love, and learns to manipulate a concentration camp where fear ruled, but did not defeat its characters.”—Mary Ellen, Circulation

Defy Me by Tahereh Mafi (Young Adult Science Fiction also available digitally on OverDrive here)
“I read this young adult science fiction and dystopian book almost immediately after it was published. Defy Me is the fifth in a series about a girl with a lethal touch and her ambition to take down the corrupt government currently in place. I'm really looking forward to 2020 when the final book comes out and highly recommend giving the series a start if you haven't yet!”—Ashley, The Trove

“This graphic novel has been hard to keep on our shelves since Telgemeier is very popular among upper elementary and middle school students. In this book, the author details her struggles with anxiety in her own childhood. Guts manages to impart wisdom on its readers with techniques on how to cope with their own worries while being a fun story.”—Ashley, The Trove

With the Fire on High by Elizabeth Acevedo (Young Adult fiction also available digitally on Libby here)
“I was impressed with the strength, tenacity, and grace of the main character, Emoni, who juggled motherhood, co-parenting, friendship, school, and a challenging culinary internship. The writing kept me engaged and wishing for more of Emoni's story.”—Kat, The Edge

“Frank Li narrates his senior year of high school, during which he contends with family expectations, his Korean-American identity, SAT prep, and love. I enjoyed the humor and authenticity of Frank's voice, and the way the story's layers unfolded over a relatively long time.”—Kat, The Edge

Red At the Bone by Jacqueline Woodson (Adult fiction also available digitally from Libby here)
“This pick is one that I listened to while commuting from New Haven to White Plains over a weekend and finished it in eBook format. Jacqueline Woodson’s lyrical storytelling shines in this history of a family, told from varying perspectives. While it’s centered around a teenage pregnancy, there is so much more that is woven into this short narrative that I couldn’t help but feel this family’s joy, regret, hope, loss, and love. I would recommend listening to it for the voice acting but there is at least one episode that needs a trigger warning if you’re driving.”—Akeyla, Adult Services

Say Nothing: A True Story of Murder and Memory in Northern Ireland by Patrick Radden Keefe

(Adult non-fiction also available digitally from OverDrive here)
“Keefe's writing comes off much like a novel in the way he weaves together stories of The Troubles, members and histories of the IRA, and the resonating effects of the murder of Jean McConville. Keefe does a wonderful job of getting the reader to sympathize with all parties at some point in their personal journey (maybe with the exception of Gerry Adams) while also leaving us frustrated by the blunders of those who promised to protect the IRA oral history recordings and its participants. I highly recommend the digital audiobook available through OverDrive, as the Irish accent of narrator only adds to the story.”—Kristen, Adult Services & Marketing

All Mirrors by Angel Olsen (Music CD)
“In one of my favorite albums released in 2019, Angel Olsen shakes up her usual style with production from the inspiring and quirky John Congleton and a fabulous string section. Her song of love and grief, ‘Lark,' is just one highlight from the album.”—Kristen, Adult Services & Marketing

Abbey Road [Super deluxe] anniversary edition by The Beatles (Music CD)
“Although I'm well familiar with all of the songs on the original album (which has always been a favorite of mine), this release provides a glimpse into what went into the making of such a magical piece of work. Aside from the various versions of the songs it contains, it's like being a fly on the wall as you hear some pretty entertaining conversation among the Fab Four and the “fifth Beatle,” Sir George Martin.”—John, Systems

Unfreedom of the Press by Mark Levin (Adult nonfiction)
“I found this book to be so incredibly informative and absolutely astounding regarding the history of the press in the U.S. For example, I had no idea that even as late as the 20th century, during world wars I and II, the government prohibited–even to the point of imprisonment–publication of anything critical of policies leading up to and during the war effort, and this despite the First Amendment.”—John, Systems