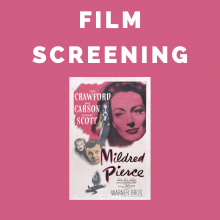 This post has expired. Visit our online calendar for current film screenings.

“Film noir” was a 1940s-1950s Hollywood phenomenon that combined “Whodunit” mystery with intrigue and romance in a dark, black-and-white setting. Two fine examples of the genre were the Warner Bros. 1945 drama Mildred Pierce along with its star, Joan Crawford. Both will be featured with a screening on Thursday, January 16 at 2:00 p.m. in Galaxy Hall on the second floor of the Library. The film, which is open to all, concludes the Library’s Fall 2019 short story discussion series led by librarian Barbara Wenglin, which explored selections from the anthology, Stories of Motherhood (Everyman’s Pocket Classics, 2012). The series will continue this spring, starting in March, with readings from the same book.

Crawford (1904-1977) portrays Mildred Pierce, a financially troubled divorcée supporting her two daughters after rebounding as a successful restaurateur. Daughter number one, Veda Pierce, portrayed by Ann Blyth, drives the narrative as a demanding, spoiled, and willful young beauty. When Mildred marries husband #2 (Monte Beragon, played by Zachary Scott), business and home conditions crumble and Monte is murdered. But by whom? Many suspects emerge, keeping the viewer riveted and on edge.

Mildred Pierce was nominated for six Academy Awards, with Crawford winning the Best Actress Oscar over such Hollywood icons as Ingrid Bergman (The Bells of St. Mary’s) and Jennifer Jones (Love Letters).

In the movie, Mildred Pierce did everything for daughter Veda, but in real life, Joan Crawford was an allegedly cruel parent who abused her children. That was the crux of eldest daughter Christina Crawford’s 1978 book Mommie Dearest, which became a 1981 film starring Faye Dunaway as Crawford.

“This is delicious irony,” says Wenglin. “The discussion that follows the screening will certainly compare the caring Mildred with the uncaring Joan.”

Crawford would receive best-actress nominations for Possessed (1947) and Sudden Fear (1952). She won critical acclaim with Bette Davis in Whatever Happened to Baby Jane? (1962), which was among the last of the film noir genre.

A bit of movie trivia: the Mildred Pierce producers had unsuccessfully recruited Davis for the lead role. Crawford is buried at Ferncliff Cemetery in Hartsdale. The Mount Kisco-born (1928) Blyth was nominated for best supporting actress and is the only surviving major cast member.

A best-supporting actress nomination also went to Eve Arden for playing Mildred’s friend and confidante. Arden is best remembered as a teacher in Our Miss Brooks and as John Travolta’s high-school principal in Grease (1978). Fans of Gone with the Wind will recognize Butterfly McQueen who portrayed Prissy in that film and appears in the uncredited role of Mildred’s housekeeper Lottie.

Support for the screening of Mildred Pierce comes from the Friends of the White Plains Public Library. Please be aware that seating in Galaxy Hall is limited as it is being substituted for the Library auditorium, which is being renovated.