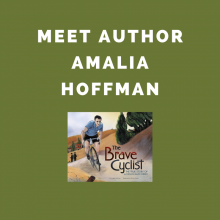 This event has passed. Please visit our children's calendar here for a current listing of events.

Israeli-born Larchmont resident Amalia Hoffman is a renowned children’s book author and illustrator. She has appeared at the Library to talk about such books as All Colors, Astro Pea, Dreidel Day, and The Klezmer Bunch, and her honors include the PJ Library Author Incentive Award for Dreidel Day.

On Monday, January 27, at 4:30 p.m. in the Library’s Galaxy Hall (second floor), Hoffman will make a return visit to discuss her newest book The Brave Cyclist: The True Story of a Holocaust Hero (Capstone Publishing, August 2019), which recently received a “Gold Selection” from the Junior Library Guild. The event is for children in grades 1-6 and their families.

Hoffman’s subject is Gino Bartali (1914-2000), who is among the greatest Italian bicyclists in having won the Tour de France twice (1938 and 1948) and many other European competitions. For his athletic prowess alone, Bartali is as revered in Italy as leading American sports figures are here.

But with Bartali, there is much more. From 1943-1945, he risked his life to protect Jews as the Holocaust spread into Italy with the German occupation during World War II. “Bartali was Roman Catholic, and he didn’t have to do it,” says Hoffman. “He hid a Jewish family in an apartment he owned in Florence, and he used his cycling skills to smuggle false identification documents to Italian Jews so that they could escape to safety. Bartali’s fame and popularity helped get him through military checkpoints.”

Like many American World War II veterans from what author and former NBC Nightly News anchor Tom Brokaw called, “The Greatest Generation,” Bartali kept his heroics to himself until the news leaked shortly before his death, and in 2013 the Israeli Holocaust Museum Yad Vashem posthumously honored him as a “Righteous Among the Nations.”

“I was fascinated. Here is a man who is a symbol of tolerance and understanding, and for this reason, I wanted to tell his story to children.”

Hoffman says that The Brave Cyclist is especially relevant because of school violence and bullying. “Most kids that I know have a tremendous sense of justice and want to improve the world.”

The Brave Cyclist has led Hoffman to expand her presence beyond local schools and libraries. The Pratt Institute and NYU alumna recently gave a Skype presentation to teachers in San

Diego, and in mid-January she was a guest at four elementary schools in Sacramento, California. “Many of the students were from immigrant families, and that made my reaching out all the more significant.”

The book also produced a friendship between Hoffman and Bartali’s granddaughter Gioia Bartali. She was present when Bartali was proclaimed an honorary citizen of Israel in 2018.