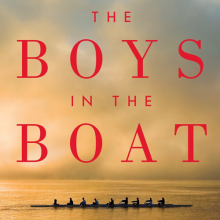 New to the Library is “Facts, Not Fiction,” a discussion series centered around three nonfiction books. White Plains resident Mark Tracten—the U.S. representative of Great Britain’s Crown House Publishing (which he formerly headed along with Brunner/Mazel Publishers)–will lead the discussion.

The Thursday discussions will be in the Library’s first-floor Community Room at 6:00 p.m.

“The Boys in the Boat is Brown’s saga of the 1936 University of Washington eight-man rowing team (plus coxswain), which surprised the United States by winning the Olympic Trials over the more elite Eastern teams in a regatta witnessed by 50,000 along the Hudson River in Poughkeepsie ” says Tracten. “Then, they surprised the world by winning the gold medal at the Berlin Olympics. Although Jesse Owens most famously beat the Nazi ‘superiority’ in track-and-field, the Washington crew also overcame tremendous odds after the Germans had won all of the other rowing competitions. They were Depression-era kids in a sport that favored the wealthy.”

The Lost City of the Monkey God tells of Preston’s participation in a National Geographic expedition to verify claims of a Ciudad Blanca (“White City”) in eastern Honduras. “It was a belief begun in the 16th century by the Spanish conquistadors and extended to the 1940s,” says Tracten. “NG scientists used 21st-century technology to prove, or disprove, it.”

1776 is McCullough’s follow-up to his Pulitzer Prize-winning 2001 biography of John Adams. “This is intriguing in its own right as McCullough reveals the many nuances of the first full year of the Revolutionary War, including the debate over the Declaration of Independence,” says Tracten. McCullough also won the 1993 Pulitzer Prize for his biography of Harry Truman.

The “Facts, Not Fiction” series is free of charge, and the three books are available for loan from the Library.