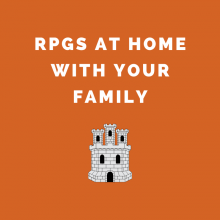 Role Playing Games are a fantastic way to work on creative, shared storytelling. Allowing all players to build their characters, help to direct the story, and use their imaginations, RPGs are not only fun, but a wonderful way to engage each other while stuck at home. And, you don’t have to even be stuck at home together! Apps such as Discord provide an easy-to-use system with text and chat to allow the game to take place virtually, as if you players were in the room together. No dice? There are apps for that, and Google itself can even roll dice for you! Need to roll three 12-sided dice? Just type “3d12” in Google and see what happens.

While I can’t direct you to any eBooks available through the Library, I can point you to some great, inexpensive, downloadable / print and play versions of RPGs you can use at home, as a beginner and with your family. Most of these will be available to purchase and download from DriveThruRPG, which is a great resource for printable gaming. If you go through the site, and its companion site DriveThruCards, you can easily find a ton of inexpensive, pay what you want, or even free download and print games.

First, I recommend Kids Dungeon Adventure. A PreK focused game where kids build a dungeon out of blocks, or LEGOs, or whatever you have. Grab some toys to be the heroes and villains. Then PLAY using the simple rules to have dungeon crawling RPG playtime experiences. And it’s only $5.99. I wanted to try this out so badly, I got it myself. My daughter and I spent a while combing through her toys for heroes and villains, and then a couple hours doing art projects: creating monster and treasure cards based on those toys. The system is simple and you only need two six sided dice (open up that unused Yahtzee!), but allowed for learning the basics of dungeon crawling. However, what was amazing was how quickly she expanded upon the basic monster fighting idea of the game and began actually roleplaying the characters. By the next game we had incorporated all sorts of elements, such as money counting to have the heroes spend the night at the inn to rest and to buy food, stats for items found in treasure chests, and more. It's an absolute blast for your child, and you! 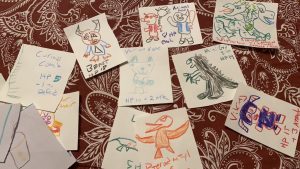 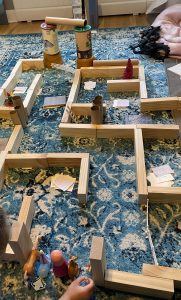 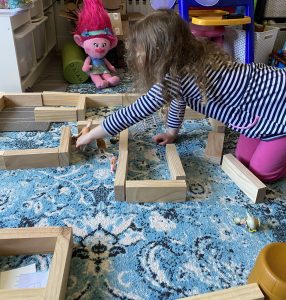 Hero Kids. It’s easy to learn, fun to play, and only $5.99 on DriveThruRPG for a PDF version. It’s great for families with kids ages 4-10 and is available in several languages. And, if you feel like growing your story and game, there are several expansions you can get. If you’re really interested in Hero Kids and its possibilities, or if your time stuck at home drags on and you need help expanding your stories, you can get the complete bundle of 23 Hero Kids titles for $19.95. Here’s an article from Wired about using Hero Kids and some tips and tricks.

No Thank You, Evil! Designed by one of the great RPG industry veteran designers, Monte Cook, this game is hailed for its streamlined, creative and fun approach to introducing RPGs to kids and families. Available through Monte Cook Games, it’s a bit more money at $10 for the base game PDF, but definitely a well-made product, with expansions available.

GeekDad called Little Wizards the “perfect way to introduce your kids to roleplaying games,” which is high praise and it’s only $14.95. Little Wizards focuses on “inquisitive storytelling” for families with kids ages 6-10.

Amazing Tales is a well-reviewed, family-focused RPG that at its core lets your kids play any kind of character they want, quickly and easily. A robot? A superhero? A princess? A pirate? A T-Rex? Sure! Just grab a comfy spot and game on.

First Fables is free, and is geared specifically towards helping parents for the first time run and storytelling RPG experience for their kids. It’s a simple introduction before moving on to some of the other more robust and engaging titles here.

Expedition is a free-to-print card and app based gaming system, that uses the cards as a means to help tell the stories. One of the cool things about Expedition is that it encourages you to create your own cards and tools to use as you play the game in order to customize the game to the stories you want to experience.

Mouse Guard RPG is the most expensive I will recommend at $19.95 for the base game PDF, but if you want to step your game up a bit, it’s so good. Great storylines, great art in the books, and the game is designed to appeal to both beginners AND veteran RPG players. If you’re familiar with the Redwall series by Brian Jacques, you’ll have an idea of what this is like: a fantasy world populated with heroic animals protecting their kingdoms against predators and dangers while having adventures.

One last recommendation, the award-winning system Dungeon World. Dungeon World is not solely “child/family targeted” which can allow for various player groups to find it interesting. It is also a more fully-featured traditional fantasy-world RPG system (like Dungeons & Dragons, but way less complicated and only $10 for the PDF) that focuses on simple rules, open-ended storytelling adventures, and fun.

Finally, here’s some articles about getting started with family RPGs, which also include suggestions for other games: