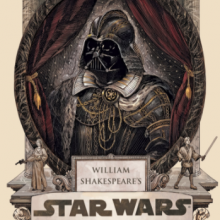 May the Fourth Be With You: Josh’s Picks

Here’s a list of interesting and different Star Wars related content to help you celebrate May the Fourth!

Star Wars toys helped to redefine toys and merchandising forever. Learn more about their origins, collectability and more in this interesting documentary.

This hilarious picture book is fun for kids, but possibly even more fun for their Star Wars fan parents.

A surprising hit in the late 1970s was Meco’s disco version of the original Star Wars’ music. When “Star Wars Theme/Cantina Band” opens with those blaster sound effects, you know you’re in for some fun.

Set the mood for your celebration with the original soundtracks from the Star Wars films!

Star Wars Insider is the official Star Wars magazine. These compilations share interviews, behind the scenes information about making the movies, and more! A great way to learn more about the saga that takes place in a “galaxy far, far away.”

Re-experience the original film in a brand new way, a Shakespearean way! Funny, bizzare, but also, somehow it works.

A silly and funny illustrated story for younger kids finds poor, suffering C-3P0 and his pal R2-D2 in a sandy predicament.

Hoopla offers a lot of great comic book reading options, and with that is a ton of Star Wars titles. The titles vary in age appropriate content from the younger (Star Wars Adventures: Forces of Destiny) to older teen/adult titles (Star Wars: Darth Vader)

Recommended for teens and adults, this funny stop motion animation send-up of Star Wars and pop culture holds nothing sacred.

April 29, 2020 10:36 am | by Joshua, Manager of Youth Services
Categories: Authors & Books, eNewsletter, Featured, Homepage Kids, Homepage Teens, Kids, Library News, and Teens.
Tags: digital materials, eBooks, May the 4th Be With You, May the Fourth Be With You, Observances and Celebrations, staff recommendations, and Star Wars.