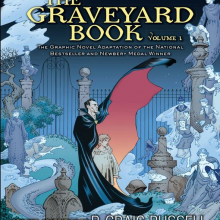 As a kid, my journey into reading and loving books began with the paranormal. I devoured Nancy Drew and Hardy Boy books along with R.L Stine’s Fear Street. I quickly moved to comic books like The Maxx, horror books by Stephen King, Dean Koontz, and my favorite author Robert R. McCammon.

I also began to venture into manga, especially CLAMP, an all-female Japanese writing group that wrote Cardcaptur Sakura, xxxHolic, and Tsubasa. Most of their manga has elements of Japanese mysticism and the occult.

With the popularity of Stranger Things, we can see that the paranormal can be a coming of age story, that is often humorous, joyful, mysterious and entertaining. The graphic novels that I am recommending for Paranormal Day (May 3rd) are rooted in coming of age, learning about different cultures, self-discovery, and adventure.

In Anya’s Ghost, Vera Brosgol writes a coming of age story about a misfit who is embarrassed by her Russian heritage, the clothes she has to wear and the greasy Russian meals her mother prepares. Anya desperately wants to fit in and date the basketball star, Sean, who doesn’t even know anything about Anya. All of Anya’s dreams seem possible when Anya rescues and befriends Emily (a ghost) from an abandoned well. At first Emily helps out Anya with her schoolwork and even gets her invited to a party with Sean. However, after a few pranks, and as Emily grows stronger, Anya becomes suspicious of Emily’s true intentions and begins to unravel her identity. Anya’s Ghost is a mystery, funny, dark and incorporates universal themes such as trying to find your place in the world with a paranormal twist. Graphic novel (13+).

In Pashmina by Nidhi Chanani, Priyanka Das struggles with her identity and doesn’t understand her past. Pri (as she is often called) is also a gifted artist but also gets bullied in school and longs to understand why her family has left India. What happened to her father? Would things be better in India? Her mother is secretive of their past and this makes Priyanka desperate for an answer.

One day, Priyanka prays to Shakti and finds a pashmina, a shawl that is hidden in a suitcase. Suddenly she is whisked away to another India, where she befriends strange creatures, eats yummy samosas and begins to discover her heritage. Pashmina is a wonderful story that incorporates stunning illustrations, mysticism and universal themes of family and learning about your heritage.

Neil Gaiman’s has a way with the fantastical and the occult. The author is known for Coraline, another wonderful book, and in The Graveyard Book, Gaiman does not disappoint. The book is a treat for those who love horror and is a bit darker than some of the other recommended books. The story starts as a boy, who is able to escape a murder becomes adopted by a couple who are ghosts. Nobody or Bod, tries to discover the ways of the graveyard with macabre mentors of the graveyard. While Bod yearns to learn all that he can in and out of the graveyard, his life will be in danger if he leaves the safety of his graveyard companions.

Danny’s life has turned upside down. She is in seventh grade and doesn’t have the comfort of her old friends. Danny feels utterly alone and realizes that all she wants in life is a new friend. Any friend! Luckily, her great-aunt has left her a strange gift. Danny inherits a magic sketchbook that draws things that come to life. At first, she creates Madison, the perfect best friend. Soon, Madison realizes that she has been drawn and becomes sad that she isn’t a real person. Danny also tries to keep it together as her everyday life becomes more and more strange. With references to anime and Sailor Moon, this is a paranormal book filled with laugh out loud moments. 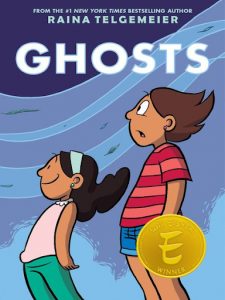 Ghosts by Raina Telgemeier (recommended 8+, available in OverDrive and Libby)

Ghosts is a wonderful surprise from author Raina Telgemeier. Like Guts, Raina Telgemeier, uses her own childhood experiences to tell the story of two sisters Catrina and Maya. When Catrina and Maya move to Northern California, their family is hoping that the fresh air in Bahia de La Luna might help Maya, who is sick from Cystic Fibrosis. However, two girls are in for a surprise: Bahia de La Luna is also haunted! Catrina isn't interested in meeting ghosts but Maya wants to make new friends! As Dia de Los Muertos approaches, the girls must figure how to reunite with their loved ones and deal with the ghosts who are interested in visiting and maybe helping them.