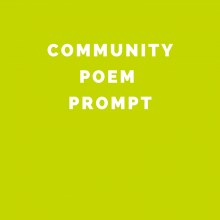 In addition to sharing a daily poem of the day from our Poetry Slam archives, we want to have a separate program for teens to get us through these tough times by working together to form a collaborative poem. With that in mind, we would ask you to do the following if you are interested in participating:

At the end of April we will use our Facebook page to present a poem that White Plain's own Zork* builds from snippets of the submitted poems.

While we are stuck in isolation, this group poem project could be a good way to work and come together in this strange new world.

To submit your poem, fill out and submit the form below by April 21st in order to be included in the community poem. Feel free to continue sharing your work throughout the month of April by tagging us on social media.

*Eric ZORK Alan, a 11x National Slam Poet competitor, is probably best known for standing on chairs. He is also known for gratuitously dropping names…like that he is the only poet ever to have his book [appropriately called “I am NOT a poet”] blurbed by Davy Jones, Dobie Gray & Wild Cherry. Zork has featured at the hottest poetry venues in America including Chicago’s legendary Green Mill where slam started. He has toured across America visiting High Schools and colleges in his mission to make more poets. He has produced and been featured in a series of “PG Safe Slam” DVDs from the National Poetry Slam to help get Slam poetry into the schools in an educational friendly and appropriate manner. He also performs at and hosts ZorkSlams [student based events] at Barnes & NobleBookstores Nationwide. He hosts Westchester County, NY's largest poetry series and slammaster for the PSI Westchester Slam series @ The White Plains Public Library. For more info go to www.iamNOTapoet.com.