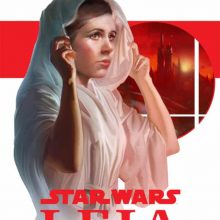 I am something of a latecomer to the Star Wars universe. In fact, a couple of years ago I assembled a Halloween costume from a Stormtrooper helmet and a lightsaber, blissfully unaware of my error. But recently my preschooler has begun reading Star Wars graphic novels, helping me become more familiar with the setting and characters. For example, he now refers to his baby sister as “a Sand People from Tatooine”—that’s a good thing, right? He adores Kylo Ren and celebrates the accomplishments of “Separatist Leader General Grievous.” Actually, I’m afraid my child might be turning to the Dark Side.

Anyway, in an effort to get into the spirit of May the Fourth, I browsed through Hoopla in search of some on-theme reading. The big movie releases of the past few years have sparked new novels written by popular YA authors in the Star Wars universe, many of which are available as Hoopla eBooks.

A Crash of Fate by Zoraida Cordova
Grades 7 and up
Two childhood friends, separated for years by circumstance, reunite in a chance meeting on their home planet, Batuu. Izzy, a smuggler’s daughter, returns to Batuu on a secret delivery mission; Jules, a farmer’s son, is directionless but reluctant to leave Batuu. The two spend a very long, action-packed day together, working to complete Izzy’s mission while getting to know each other all over again. The story had several classic elements that I tend to associate with Star Wars: family secrets, revenge, fantastical creatures, love, smugglers, long-lost friends, and trusty old spaceships. Although I am not this book’s target audience, I still enjoyed the story, and I imagine true fans would really love this trip to Batuu.

More from the Star Wars universe:
Ahsoka by E. K. Johnston
Grades 7 and up
“The breakout character of the Star Wars: The Clone Wars TV show finally gets her story told, and fans will not be disappointed. After leaving the order of the Jedis and her teacher Padawan Anakin Skywalker, Ahsoka embarks on a journey to discover who she is and how she can move on after leaving the group that has defined her for so long.”—School Library Journal

Star Wars: Rebel Rising by Beth Revis
Grades 9 and up
“When Jyn Erso was five years old, her mother was murdered and her father taken from her to serve the Empire. But despite the loss of her parents she is not completely alone-Saw Gerrera, a man willing to go to any extremes necessary in order to resist Imperial tyranny, takes her in as his own, and gives her not only a home but all the abilities and resources she needs to become a rebel herself.”—publisher summary, Disney–Lucasfilm Press

Leia, Princess of Alderaan by Claudia Gray
Grades 8 and up
“Sixteen-year-old Princess Leia is training to pass three rigorous challenges so she can be decreed rightful heir to Alderaan's throne. But she also desires to help her parents as they secretly develop a rebellion against the Empire. Gray compellingly fills in Leia's backstory with friendships and a romantic relationship, and through her protagonist's courageous actions, Gray repeatedly hints at the great leader Leia will eventually become.”—Horn Book Reviews

Force Collector by Kevin Shinick
Grades 7 and up
“When his grandmother dies and his parents announce they're sending him away to a school on the other side of the planet, Karr reaches his breaking point. He needs to know what his destiny holds, and whether the Jedi are involved. Accompanied by Maize, the blunt, unpredictable new girl at school with ties to the First Order, and RZ-7, Karr's solicitous droid companion, he sets off into the larger galaxy to find the truth.”—publisher summary, Disney–Lucasfilm Press

And here’s something completely different…
The Science of Star Wars by Mark Brake and Jon Chase
This is a nonfiction book, generally “shelved” in the adult collection, but perhaps of interest to younger fans as well.

April 29, 2020 10:07 am | by Kathlyn, Teen Librarian
Categories: Authors & Books, eNewsletter, Featured, Homepage Teens, Library News, and Teens.
Tags: book recommendations, May the 4th Be With You, May the Fourth Be With You, Observances and Celebrations, Star Wars, and YA Fiction.