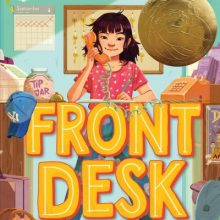 Asian American Pacific Islander Heritage Month is celebrated during the month of May. I had been wanting to read Hello, Universe by Erin Entrada Kelly for a while now. It won the Newbery Medal in 2018! It was a potential pick for Book Bunch, which is a book discussion group that Deb and I run together for fourth and fifth graders. Be sure to check out our virtual calendar since Book Bunch has gone virtual and we’d love some new members. Keep on reading for my thoughts on Hello, Universe as well as some other suggestions for books that celebrate Asian American Pacific Islander Heritage Month! 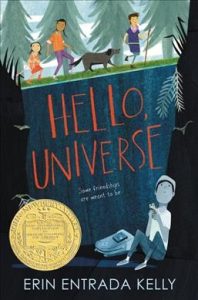 Virgil is a quiet kid that feels like a failure after not being able to talk to a girl at his school before the year ended. Valencia has been having nightmares about being the only person in the world and thinks she’s okay with being alone. Kaori is a psychic that believes there are no coincidences. Chet thinks he’s better than others and feels the need to bully his classmates. In this endearing tale told by differing viewpoints in each chapter, the unexpected happens to intersect the lives of these four tweens. This is a story that you’ll want to read for all its eccentric characters! Besides the main quartet, there’s Kaori’s little sister Gen and she’s spunky as well as Virgil’s Lola that is always there with some wisdom via Filipino folklore. When Virgil is in a serious potentially life threatening predicament, he thinks about all the things he would do if he ever got out of that situation. There are a lot of things in life that can make any of us fearful or uncomfortable but we need to be strong and face them. As Virgil says “one word could make all the difference.” I’d like to think it’s true and that we all have the power to make our lives more positive!

Front Desk by Kelly Yang
For children in grades 4-6.
OverDrive: Audio and eBook
“Through the story of fifth-grader Mia Tang, readers experience the courage, hard work, and dreams of a young Chinese immigrant…many readers will recognize themselves or their neighbors in these pages.”—Kirkus Reviews

Stargazing by Jen Wang
For children in grades 3-6.
OverDrive: eBook
“This contemporary graphic novel from Wang (The Prince and the Dressmaker) thrums with the quiet dramas of friendship and family, and showcases the diversity of the Chinese-American experience.”—Publishers Weekly

Aru Shah and the End of Time by Roshani Chokshi
For children in grades 3-6.
Hoopla: eBook
OverDrive: Audio and eBook
“Seventh grader Aru should never have lit the ancient lamp. When she put the lighter to the wick, the world froze and she released the awful Sleeper. Aru is suddenly launched into the world of the gods and surrounded by mythical characters come to life.” —School Library Journal