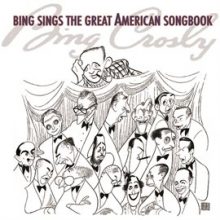 Possibly our most dynamic digital resource, Hoopla includes a variety of different formats from books to movies and music. In order to highlight some of these, we've gathered staff recommendations of just a few formats you can stream and download with your library card. Below are some album recommendations from Adult Services & Local History Librarian Austin Duffy and Adult Services Librarian Sharon Rothman.

Bing Crosby. Bing Sings the Great American Songbook.
Short, breezy covers of classics like “Manhattan” and “I’ve Got A Crush On You.”

Nancy Wilson. The Great American Songbook.
Elegant, varied renditions include “The Nearness of You” and “On the Street Where You Live.”

Ethel Ennis. The Great American Songbook.
Ennis could have been a big jazz star but chose a quieter life near her hometown of Baltimore.

Bring the Great White Way to your home with these original Broadway cast recordings selected by Sharon:

Ain’t Too Proud to Beg (2019)
The story follows The Temptations' extraordinary journey from the streets of Detroit to the Rock & Roll Hall of Fame.

Beetlejuice (2019)
Based on the 1988 film of the same name. Show about family, love, and making the most of every day-o.

Mean Girls (2018)
Stage adaptation of the acclaimed 2004 movie by Tina Fey and book Queen Bees and Wannabes by Rosealind Wiseman.