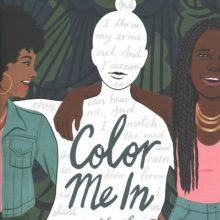 While making a list of potential titles for this month, I was drawn to In the Neighborhood of True by Susan

Kaplan Carlton. It’s historical fiction, set in Atlanta in 1959 (rather than WWII, as many other YA historical fiction titles are). I just had to see what the author would do with this setting and time period. When Ruth’s father suddenly dies, her mother resettles the family in a guest house belonging to her own wealthy parents. Ruth’s grandmother is heavily invested in the local debutante scene and encourages Ruth not to mention her Jewish faith around her new friends. Ruth is simultaneously enticed by the glamour of her grandmother’s social set and repulsed by the prejudice she finds there; her growing feelings for handsome classmate Davis Jefferson (yep) further complicate matters. I was fascinated learning about an aspect of Atlanta’s history that was new to me, and inspired by Ruth’s rabbi’s leadership in the Civil Rights movement.

In the Neighborhood of True is available on Hoopla as an eBook and on OverDrive as an eBook.

Little & Lion by Brandy Colbert
Grades 10 and up
OverDrive: eBook
“Suzette has been devoted to Lionel from an early age, and vice versa. At first glance, they don't look like siblings—a black girl and white boy barely a year apart in age—but their blended family is closely knit. At her parents' insistence, Suzette has been away at boarding school since Lionel's mental health began to deteriorate and he was diagnosed with bipolar disorder. Now she's back in L.A. for the summer, and she finds more complications waiting.”—School Library Journal

Color Me In by Natasha Diaz
Grades 8 and up
OverDrive: eBook
“Sixteen-year-old Naveah isn't seen by her peers as African American because of her light skin. When her parents separate and she and her mother move in with her grandparents in Harlem, Naveah is forced to recognize that her relationship with her racial identity is complex. As her father watches her relationship with her mother's Baptist family grow, he chooses to complicate matters by deciding that, instead of having a Sweet 16 party, Naveah should celebrate the Bat Mitzvah she was never encouraged to have when she was younger.” —School Library Journal

You Asked for Perfect by Laura Silverman
Grades 9 and up
OverDrive: eBook
Hoopla: eBook
“Gay Amir is Pakistani Muslim, and bisexual Ariel comes from an observant Jewish family; the boys have been in the same school for years and their families are friendly, but it is only now that they really notice—and quickly fall for—one another.”—Kirkus Reviews

Sick Kids in Love by Hannah Moskowitz
Grades 8 and up
OverDrive: eBook
Hoopla: eBook and digital audiobook
“The jacket art promises that “they don’t die in this one,” which is both a spoiler and a nod to popular YA books, notably The Fault in Our Stars. Sixteen-year-olds Isabel and Sasha meet in the hospital drip room: your basic meet-cute, except with discussions of whether their diseases are fatal. They aren’t: #OwnVoices author Moskowitz (Teeth) is interested in what it’s like to have a chronic illness that makes it hard to get to school every day, go out with friends, and show up for planned events.”—Publisher’s Weekly