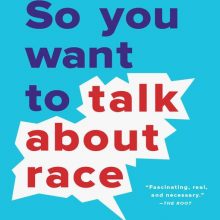 This may seem irrelevant to the topic of antiracism, but I want to start by saying that I’m a knitter. In January 2019, the knitting community began a moment of reckoning with racism in the fiber arts industry. If you’re interested, you can read more about those conversations here, but suffice it to say that this event brought me to a new awareness of racism. After that, I thought a lot more consciously about my privilege, my place as a white librarian working with primarily teens of color, and my responsibility to teach my young children about antiracism.

By no means can I speak as any kind of authority, but I’m committed to continuing to educate myself, to examine my own thoughts and behavior, and to speak up when I witness racism. I’d like to share some of the resources that have helped me learn so far, as well as the ones on my up-next list. I’m writing this as a white person aware that I have work to do, in hopes that some of these resources will help others. With thanks to the knitters who helped shape my perspective, and to the authors and educators whose time and energy went into creating these books, websites, and courses, here is my list… 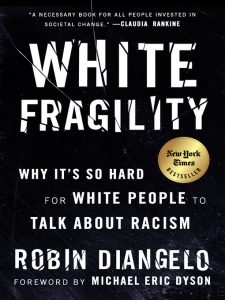 White Fragility: Why It’s So Hard for White People to Talk About Race by Robin DiAngelo and Michael Eric Dyson
OverDrive: eBook and digital audiobook
This was the first book I read about this, back in winter 2019. It was an excellent entry point and really helped me work through the uncomfortable feelings that popped up and threatened to keep me from facing the topic. I found DiAngelo’s message empowering and endlessly thought-provoking.

“According to antiracism scholar and educator DiAngelo, in conversations about race and combating racism, white participants often struggle with intense feelings of anger and defensiveness when presented with evidence that they benefit materially from systemic white privilege. Here the author offers a valuable guide to this phenomenon—which she terms white fragility—and makes concrete suggestions for how to address it, both in ourselves (if we are white) and in our communities. DiAngelo challenges white readers to acknowledge and then set aside their feelings in order to think critically about how their racial identity operates on a personal and collective level within a system that privileges whiteness at the expense of those classified as not white.”—Library Journal 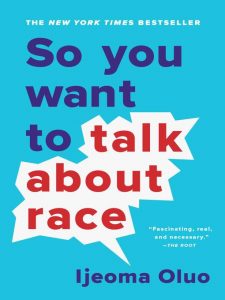 So You Want to Talk About Race by Ijeoma Oluo
OverDrive: eBook and digital audiobook
Hoopla: digital audiobook
Ijeoma Oluo has a talent for explaining complex and difficult issues in such an approachable way. Despite the heavy subject matter, I felt encouraged after reading this book; I learned so much and gained a completely different perspective. I was also really pleased to hear Oluo on WNYC’s The Brian Lehrer Show on Monday, speaking specifically about the current protests.

“Straight talk to blacks and whites about the realities of racism…. Throughout the book, Oluo responds to questions that she has often been asked, and others that she wishes were asked, about racism ‘in our workplace, our government, our homes, and ourselves.’ ‘Is it really about race?’ she is asked by whites who insist that class is a greater source of oppression. ‘Is police brutality really about race?’ ‘What is cultural appropriation?’ and ‘What is the model minority myth?’ Her sharp, no-nonsense answers include talking points for both blacks and whites. After devoting most of the book to talking, Oluo finishes with a chapter on action and its urgency.” —Kirkus Reviews 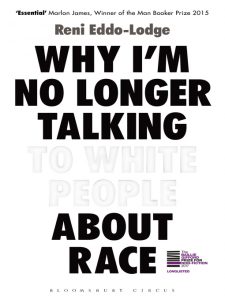 Why I’m No Longer Talking to White People About Race by Reni Eddo-Lodge
OverDrive: eBook
Eddo-Lodge wrote this book after her blog post of the same name went viral in 2014. She expresses the futility, pain, and cost of attempting to discuss race with white people who simply refuse to see race as an issue.

“Using research, personal experience, and firsthand interviews, the author details what it means to be black in Britain, especially in a theoretical postracial society. She clearly outlines the history of oppression in her country by examining systemic racism, white privilege, feminism, immigration, race and class, social justice, and more. Of note is the review of intersectionality in feminism and the difficulties of understanding feminism without considering class and race as part of the struggle. This informative work challenges readers to study the patterns of racism and how it has unwittingly upheld societies.” —Library Journal

“Reynolds's adaptation of Kendi's National Book Award–winning title teaches readers to think critically about racism and antiracism in the United States and the Western world. Within short chapters and a chronological format, the authors discuss specific people and/or historical events. Those selected examples are used to expand upon broader themes. There are no shallow representations of the men and women profiled in this book. The authors argue that people fit into three categories, some transitioning from one category to another: segregationists, assimilationists, and antiracists. The actions of President Thomas Jefferson, Cotton Mather, W.E.B. Du Bois, Martin Luther King Jr., Angela Davis, and President Barack Obama, among other U.S. presidents, citizens, and organized movements, are evaluated in relation to these categories.” —School Library Journal

Me and White Supremacy by Layla F. Saad
OverDrive: eBook and digital audiobook
Hoopla: eBook
“An activist program for confronting white privilege and dismantling white supremacy. Building on a workbook downloaded by nearly 90,000 readers, multicultural writer Saad, born in Britain and now living in Doha, Qatar, delivers ‘a one of a kind personal antiracism tool’ that is meant foremost to teach white readers how to recognize their privilege and ‘take ownership of their participation in the oppressive system of white supremacy.’ Many readers will likely recoil, protesting that they're not racist, are colorblind, have nothing but benevolent thoughts, and so forth. The author is ready for them: White supremacy, she writes, is not just a comprehensive system, but it also trains those who benefit most from it to ‘keep you asleep and unaware’ of the power that whites hold relative to those of other races and ethnicities: BIPOC,’ as in, ‘Black, Indigenous, and People of Color.’”—Kirkus Reviews

How to Be an Antiracist by Ibram X. Kendi
OverDrive: eBook and digital audiobook
The audiobook version, read by the author, is highly recommended by staff, as you get a taste for what a powerful orator Kendi is.

“Kendi follows his National Book Award–winning Stamped from the Beginning with a boldly articulated, historically informed explanation of what exactly racist ideas and thinking are, and what their antiracist antithesis looks like both systemically and at the level of individual action. He weaves together cultural criticism, theory (starting each chapter with epigraph-like definitions of terms), stories from his own life and philosophical development (he describes his younger self as a ‘racist, sexist homophobe’), and episodes from history (including the 17th-century European debate about ‘polygenesis,’ the idea that different races of people were actually separate species with distinct origins). He delves into typical racist ideas (e.g. that biology and behavior differ between racial groups) and problems (such as colorism), as well as the intersections between race and gender, race and class, and race and sexuality…. This powerful book will spark many conversations.”—Publisher’s Weekly

Why Are All the Black Kids Sitting Together in the Cafeteria? by Beverly Daniel Tatum
OverDrive: eBook
“Situations perceived as social segregation are frequently observed at the middle school, high school, and university levels. Here, a look at the school scene leads into a deeper study of racial relations. With a combination of anecdotal material, anthropological data, and psychological insight, Tatum examines the development of racial identity. In balanced sections, she considers understanding blackness in a white context and the development of a white identity itself. There is also an examination of critical issues in Latino, American Indian, and Asian-Pacific American identity development.” —School Library Journal

Many more books on this topic are available on OverDrive and Hoopla.

Additional resources:
Project READY
Project READY stands for Reimagining Equity and Access for Diverse Youth. It’s a free online professional development course designed specifically for educators and librarians. But the first section of the course builds a foundation that would benefit anyone and everyone, before continuing on to a further exploration of more library-specific issues. The section on implicit bias is the most constructive explanation I’ve seen, covering both the brain science that causes implicit bias, and the damaging impact this bias can have on others if left unchecked. Unlike the eBooks listed above, this course is freely and immediately available to everyone—no holds list involved.

Raising Race Conscious Children
I found this website after coming across a racist illustration while reading a Dr. Seuss book to my toddler. I was horrified, but paralyzed. I didn’t want to let the illustration stand unchallenged, but felt unsure of what to say. Luckily, this blog–run by educator Sachi Feris–can help parents prepare for moments like these. There’s a list of strategies (only two appear per page-–click “next” for more), and specific scenarios appear on the FAQ page. For more concrete examples, check out their list of 100 race conscious things to say to your child. My big takeaway from this blog is that conversations about race with children should begin early and happen often. Parents don’t have to cover all aspects of race in one daunting conversation; rather, take advantage of the many everyday opportunities to discuss small pieces of the bigger picture.

The Conscious Kid
The Conscious Kid is another source of information for parents and educators. I saw this account referenced on Instagram the other day, and was struck by this particular post. I’ll let the post speak for itself, but it summarizes an idea that I think white parents often get mixed up. The Conscious Kid’s Patreon page offers additional resources; the Instagram account is free and absolutely worth a follow. Additionally, they’re working with Instagram staff to help make the platform a safer and more effective place for antiracism education.